Guess where the city ends and the county begins,” says Bill Given, the two-term mayor of Grande Prairie—the main retail and services hub for northwest Alberta. We’re driving past gas stations, hotels and a Superstore. Ahead there’s a rail yard, a megachurch, an RV sales lot and a farm equipment store with rows of tractors by the side of the road. A small green sign notes the city limits. It’s the only obvious indication we’re crossing into the neighbouring municipal district, County of Grande Prairie No. 1.

Since elected to office—first as a councillor in 2001 at the age of 24, then as mayor in 2010—Given has seen the economy boom and the city’s population nearly double in size. “Grande Prairie is a city of newcomers,” he says, noting the city has seen successive waves of in-migration, from agricultural pioneers to the growth of forestry and natural gas exploration. The recent economic downturn brought a sharp rise in unemployment and the crime rate went up—in 2016 Maclean’s named Grande Prairie “Canada’s most dangerous city.” But Given is quick to point out the city has a young population and is the centre for “legitimate” economic activity within a trading region of over 250,000 people, which also makes it a draw for “illegitimate activities.”

“Across Alberta, local government is built on a system that reflects the way the province was 100 years ago.” -Bill Given, Mayor of Grande Prairie

Arguably the biggest issue in Grande Prairie stems back to 1995, when Premier Ralph Klein abolished regional planning commissions. Composed of representatives from the municipalities in a given area, the commissions made plans governing local development. In the absence of a plan, development around Grande Prairie in the last 20 years has been a free-for-all, with the county able to offer lower taxes than the city, which is responsible for many services and urban amenities used by people in the county. Just outside the city limits, Given and I drive through a suburban development with big houses and lots. “City services, county taxes,” boasts the sign advertising the development.

“Grande Prairie is ringed with these kinds of developments,” says Given. “If you have enough money you can afford to escape higher taxes. We need to have a grown-up, rational discussion about how we can have a local government that’s aligned with the way our community actually exists today,” he says.

“Across Alberta, local government is built on a system that reflects the way the province was 100 years ago, when you had well-defined rural areas and well-defined urban areas, and there was a clear separation of responsibilities. Alberta today is far more integrated. Do we need a city and a county? Maybe we just need one municipality.”

As a child, Given was raised mostly by his grandparents, who lived in a trailer park. Today he sees a bright future for his city despite the challenges. Companies such as Seven Generations Energy continue to invest in the area. With public funding, the sprawling Art Gallery of Grande Prairie reopened in 2012, and a $647.5-million hospital will open in 2019 next to Grande Prairie Regional College (designed by Douglas Cardinal). A women’s shelter, Odyssey House, recently built new supportive housing, and the city’s Metis Local is working to build a new shelter for elderly homeless.

“For someone new here, if you want to be on a board or lead a volunteer organization, we can find something for you,” says Given. “It’s a flat social structure in Grande Prairie.”

What do you love about your community?
What most concerns you?
If it could be the way you wanted, what would your community look like?

Ebony Rempel, executive director, Odyssey House: I’m not originally from here. You leave Grande Prairie and you don’t see civilization or really any cities for quite a while. I’m not used to that. For Odyssey House, I’m pretty sure we’re the largest geographical catchment area in Alberta in terms of how far away women will come to access the services at the shelter. If the city were smaller then we wouldn’t be able to have the funding and resources that we need, and if we were bigger it would be hard to have those in-depth, inter-agency conversations that we do have here, where we’re in a room with 15 people versus 70 people.

Noura Daou, community support worker, Cultural Integration Academy: The crime rate has gone down and there aren’t police cars everywhere you go—so that’s good. I would like to see more acceptance of different cultures. Some people don’t feel like they belong. But people born and raised here, or somebody like me—I came here 11 years ago and adopted it as my home—it means so much to me and I care for it.

Melanie Jenner, communications coordinator, Art Gallery of GP: What do I love about it? That’s a good question; you want to know why people stay. My extended family is here and I grew up here, so to me this is home. What concerns me is when there’s a separation of us and them—I don’t like that.

Courteney Davison, GP Brewing: I come from a town in BC where you can’t leave your doors unlocked, and here I leave my truck running out front all the time and it’s always there.

Don Gnatiuk, president, Grande Prairie Regional College: There’s a common story in Grande Prairie. People say “I came up for a job and now I’ve been here 10 years.” And here I am, I’ve been here 10 years. I was raised in Montreal and I’m a happy camper in this town. I get the social interaction and the intellectual challenge I need; the retail network I need is here; I’m fulfilled. It’s easy to dismiss a community that’s in the oil and gas, lumber sector five hours north of Edmonton. But take a look under the hood and you’ll see there’s something really warm here.

Angie Crerar, president, Metis Local 1990: I’ve been here since 1966. I’ve worked with thousands of people, all walks of life, religions and creeds, and you know what? When somebody’s in dire need we’re all there. I love Grande Prairie. This community saved my life, my children’s life, when we moved here, and I will never be able to repay the good life that we made here. # 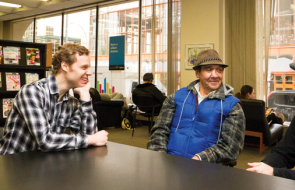 Each morning, David McMain tries to get to work an hour before he officially starts. But he doesn’t head straight to his office at Edmonton’s Stanley Milner library, where he is an outreach worker. Instead, he checks who’s hanging out in the mall. “The shelters kick everyone out between 6 ...