In the presence of royalty yesterday,” the Calgary Daily Herald reported July 29, 1914, “Dingman Discovery well spouted like an inexhaustible gasoline fountain 40 feet high until driller Hovis, at the direction of managing director A. W. Dingman, ordered the remarkable well turned off.”

Princess Patricia had urged people to keep their cameras at the ready as her parents looked on. The Duke of Connaught—Prince Arthur, the third son of Queen Victoria—was the Governor General of Canada. His wife, the Duchess of Connaught—Princess Louise Margaret of Prussia—had insisted on seeing Turner Valley during their Alberta visit. In a wooden derrick on the banks of the Sheep River, they learned how cable tool drilling equipment pounded into the Earth.

At 2:31 p.m. the show began when driller Marty Hovis began to open the valve. He told onlookers they need not run until they saw him run. Manager Archie Dingman—after whom the press named the well—suggested that people place their fingers in their ears if the noise of the gas was unendurable. Finally the well erupted. “The casing, the floor of the derrick, the upper works and sheds were all sprayed with the volatile gasoline fluid and many barrels of it shot up into the air while the royal party watched with breathless interest,” the Calgary paper reported. Dingman ordered the valve closed at 2:34, and the duchess and the princess rushed forward to dip their white gloves into the fluid.

The significance of the discovery 100 years ago of the first commercial oilfield in Western Canada could not have been imagined. Turner Valley changed the West, and Canada, forever. At its peak during the Second World War, Turner Valley produced more than 95 per cent of Canada’s oil and was the most productive oilfield in the British Empire. For 61 years after the royals toured, Canada’s first natural gas plant removed impurities at the site and pushed fuel through pipelines to southern Albertans.

Remarkably, that pioneering plant still stands. This complex of buildings and processing equipment, the only such surviving example in Canada, was decommissioned in 1985 and received provincial heritage designation in 1989 and federal designation in 1995. The historic site tells the story of oil—its discovery, production, processing and distribution, as well as the industry’s social challenges. The oil industry has always involved gambles, risky technology, unpredictable development, regulation, environmental opposition and volatile commodity markets. 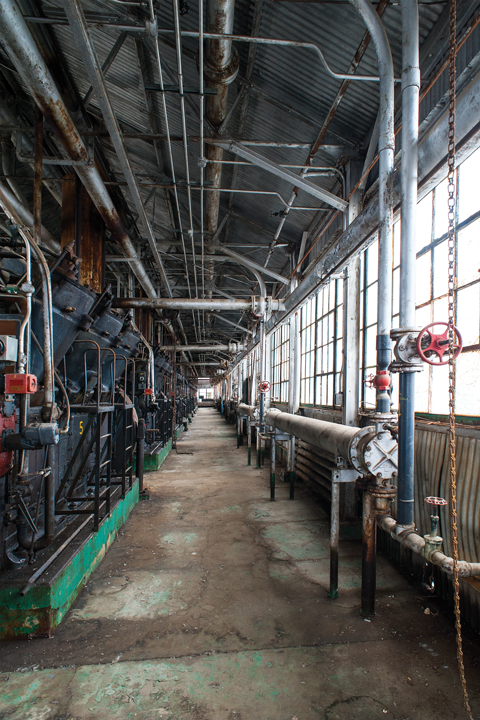 When the Duchess of Connaught insisted on seeing the famous Dingman well in 1914, it was only three months old. She and her party asked about drilling for oil, operations and the processing of wet natural gas. How had Dingman happened to pick that particular place for an oil well? “Was it on account of the configuration of the ground?” the Queen’s son wanted to know. The geological formations clearly visible across the river show anticlinal folds buried below the surface, Dingman said. “Also, there were strong indications of wet gas near the location where we began to drill.”

Natives, cowboys and settlers had all noticed bubbling gas on the banks of the river. Finally, in 1911, Okotoks farmer Bill Herron bottled the smelly substance and sent it for testing. Analysis confirmed his suspicion. Herron bought the land, formed a company and built Calgary Petroleum Products No. 1, or the Dingman No. 1 well.

Gas still bubbles up from the ground near the location of the discovery well, and geological formations are still visible in the eroded bank of the Sheep River. In the early years, petroleum geologists used similar outcrops and exposed formations to detect deeply buried pools and traps that might hold oil. The Alberta Society of Petroleum Geologists was formed in 1927—today’s Canadian Society of Petroleum Geologists.

At its peak during the Second World War, Turner Valley was the most productive oil field in the British Empire.

Another well was already being drilled when the vice-regal party toured the Turner Valley site a few weeks after the May 14, 1914, discovery. The group walked upstream to the Dingman No. 2 well, which used a more modern, steel rig. Dingman ordered the tools removed from the hole. Behind the string came a large flow of natural gas, over which the women tossed handkerchiefs that soared into the air. Calgary alderman T. A. P. Frost was not so lucky; when he tried the same trick with a folded dollar bill it “slowly disappeared down the well under the anguished gaze of the alderman.”

Both of these early wells used a primitive drilling system. A massive metal bit, at the end of a long rope, bored a hole deep into the earth for months before reaching the producing formations, down 900 metres or more. The drill, however, hit pockets of natural gas every few days. The drillers diverted this flow to the steam boilers that powered the rig, replacing coal as fuel. Drilling was slow, methodical and tedious—a typical well took more than a year to drill. Nothing happened quickly. By today’s standards, cable tool drilling was inexact and dangerous. Rigs drilled in an “open hole,” and a rush of gas and the odour of rotten eggs indicated each pocket of petroleum.

The two wells tell vastly different stories. The 1914 well produced wet natural gas from 1914 to 1939 and was properly “abandoned,” that is, cut off below surface level and plugged, in 1964. Dingman No. 2—which also produced wet gas—was a problem well. Drilling stopped in 1917, but abandonment took generations. For decades flaring gas flickered from a cliff by the bridge across the Sheep River. Finally, in the summer of 2009, engineers properly abandoned the well. Though techniques have changed, the need to drill—and the responsibility to cap Alberta’s old wells—continues. 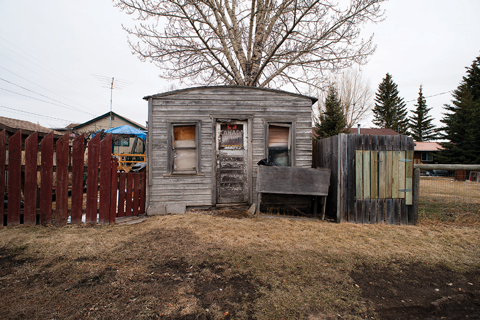 Oilman’s shacks were small and easily moved on the back of a flatbed truck, minimizing the need for materials. (George Webber)

Gas processing at Turner Valley began in 1914. Though crude oil had been the quest, the discovery well found wet natural gas. In 1914, Herron’s Calgary Petroleum Products (CPP) installed the first natural gas absorption plant in Canada and the second in the world. Dingman took the royal party to a compressor squeezing liquid out of the gas. Wet gas went in one end of the single-cylinder device and dry gas and condensate, or “pure gasoline,” came out the other. Photographers got the princess to pose holding containers as the drillers filled them. The royal party received vials of the gasoline as mementos.

Petroleum is always impure and potentially volatile. Processing and refining removes impurities and produces a wide range of products. With no market for dry gas, however, CPP flared what it couldn’t use in its own operations from 1914 until 1921 when the first natural gas pipeline was built to Calgary. Then, as now, a product that cannot find a way to market is considered useless.

The 1924 discovery of high-pressure sour gas changed the Turner Valley story. The Royalite No. 4 well brought large amounts of liquids to the surface, along with natural gas containing a much higher percentage of hydrogen sulphide (H₂S) than in previous wells. For a time the well blew wild, eventually igniting and creating a pillar of fire. H₂S is deadly even at small concentrations, so processing the high-pressure sour gas from the 1924 discovery was an unprecedented challenge. Elsewhere, producers shut in sour gas wells and moved on. But Royalite Oil Company—as CPP was renamed after Imperial Oil purchased it in 1921—hired Sam Coultis, a chemist, and he built the world’s first high-pressure sour gas processing facility at the Turner Valley gas plant. It used soda ash as a scrubbing agent to remove more than 95 per cent of the H₂S and began producing sweet gas in 1925.

Until Royalite built Canada’s second sulphur plant in 1952, the plant merely vented the H₂S from two tall towers. The heavy smell of sulphur—what W. O. Mitchell called “a big fat fart”—struck the people of the day as the “smell of money.”

Concern over waste and environmental issues evolved along with the development of the Turner Valley oilfield. Flaring, at its worst, would waste $10 of natural gas to produce $1 of gasoline. The lack of access to pipelines—expensive to develop—encouraged flaring, and companies argued that they were within their rights to produce the petroleum as they saw fit. But the public good was not well served by wasteful practices or dangerous odours. In 1932 the Alberta government created the Turner Valley Gas Conservation Board to regulate the development process. Oilmen appealed to the Supreme Court of Canada and successfully delayed the creation of a regulatory system in Alberta until 1938 with the creation of the Alberta Petroleum & Natural Gas Conservation Board. Over time this became the Energy Resources Conservation Board, which just last year became the Alberta Energy Regulator.

Starting in 1914, southern Albertans would drive to Turner Valley to buy barrels of gasoline. In 1921 the Gas Company—today’s ATCO Gas—built a natural gas pipeline to connect the field to Calgary. In the late 1920s a series of pipelines connected Turner Valley to Calgary refineries, and more followed the discovery of crude oil near Longview in 1936.

The compressor building at the Turner Valley gas plant tells the pipeline story. Until the late 1930s, field pressure alone was enough to push natural gas to consumers, but flaring seriously depleted the pressure in the oilfield. As a result, in 1938 Royalite installed the first of a series of large Cooper Bessemer GMV 5000 compressors at the plant. Ten of these massive units, the world’s first, increased pressure sixfold, enabling the gas to be processed and pushed to market. During summer months these compressors also pushed scrubbed natural gas into the depleted Bow Island natural gas reservoir, where it was stored until winter increased demand for natural gas.

Concern over waste and environmental issues evolved along with the development of the Turner Valley oilfield.

Energy pipelines have long been controversial technology. Oil pipelines in particular are much in the news these days. The Turner Valley site helps set today’s challenges in context. Political, regulatory and economic changes are all part of the story of how petroleum is moved to market and how companies try to maintain their social licence.

A century after the Governor General, the duchess and the princess visited the 1914 Discovery Well, another generation will have a chance to ask questions at the birthplace of the Western Canadian petroleum industry. On May 14, 2014, centennial celebrations, open to the public, will be held at the historic site. (For updates on the event, see turnervalleygasplant.org). Interim displays in the partially refurbished interpretive centre—the oldest building left—will explain the history of the site and plans for its redevelopment. More-ambitious visitors can take a guided tour of the gas plant itself. Interpreters and industry experts will be available to answer questions. And a display of naturally occurring bubbling gas will reinforce why Okotoks farmer Bill Herron decided to drill here in the first place. 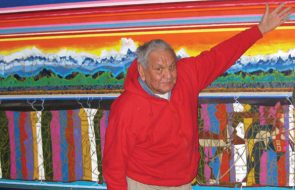 February. Cold Lake is frozen and silent. An ample sky mirrors the terrain below. But landscapes are inhabited even when they’re empty.  I’m here to visit the painter Alex Janvier at his gallery across from the downtown marina. He’s famous. Perhaps even more so than the military base nearby and the ...