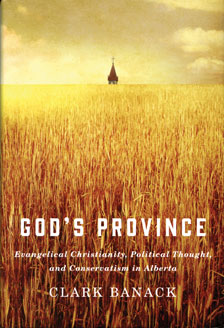 Alberta may be the only Canadian province in which two premiers collaborated to write a play. That William Aberhart and Ernest Manning were playwrights—in 1931, before either became premier—is but one surprise in God’s Province, the first book by Brock University associate professor Clark Banack. Depending on one’s familiarity with Aberhart, Social Credit premier from 1935 to 1943, and Manning, SC premier from 1943 to 1967, the topic of the play may also amaze, though in a less delightful way. The Branding Irons of the Anti-Christ told the story of a young woman who failed to worship Jesus Christ ahead of “the coming Rapture”—an end time when only those who are “born again” shall be saved—and who was subsequently killed “by the army of the Anti-Christ.” Banack discusses the play halfway through his book, not to highlight an obscure work of evangelical literature, but to show the kind of religious belief that has informed public policy decision-making and debate in Alberta from the early days of the province into the 21st century.

God’s Province is a well researched and illuminating, if at times repetitive, analysis of the influence of religion on the political thought of Henry Wise Wood (president of the United Farmers of Alberta from 1916 to 1931), premiers Aberhart and Manning and Reform Party founder Preston Manning. For these political leaders, writes Banack, religion was “the key force influencing their thinking about human agency, the ends of politics, the role of the state, the nature of the economy and the proper duties of citizens.” But there were differences: Wood had a postmillennial Christian belief in the capacity of individual citizens to build “the kingdom of God on earth” through co-operation. In contrast, Aberhart and the Mannings believed in a premillennial Christianity in which only God could bring about the “kingdom” and so the chief role of the state was to facilitate individual freedom through minimizing market regulation. On a point of continuity, a “religiously based distaste for state-led economic collectivism” was common to all.

Banack isn’t arguing that Alberta is more religious than other provinces—it isn’t—either in the early 20th century or today. But he does contend that the political trajectory of Alberta is unique in Canada, and that the “shared heritage” of these four political leaders in a “broader American evangelical Protestant tradition” played a dominant role in shaping “the individualist and anti-socialist ethos present within the province.”

Banack contends it is “too early” to tell if the NDP election marks a turn. Either way, God’s Province is a guide to the “religious moorings” of an influential strain of populist politics in Alberta.
—Tadzio Richards is an associate editor at Alberta Views.

Alberta may be the only Canadian province in which two premiers collaborated to write a play. That William Aberhart and Ernest Manning were playwrights—in 1931, before either became premier—is but one surprise in God’s Province, the first book by Brock University associate professor Clark Banack. Depending on one’s familiarity with ...