Photographer Joey Podlubny wants to inspire people to look at the world differently. His latest project, the book The Four Directions of Reconciliation, documents the Chipewyan Prairie First Nation’s relationship to the land as they become increasingly surrounded by oil sands development. The Chipewyan Prairie Dene were the last group to sign Treaty 8 in 1899. Families were taken from hundreds of kilometres around and placed on the reserve lands in and near Janvier, about 120 km south of Fort McMurray. Podlubny regularly drives from Calgary to Janvier—where today just over 900 members live on three separate reserves. “Chipewyan Prairie First Nation is like my second home,” he says. “I’ve eaten moose tongue and rabbit heart, slept in the cold bush, chopped wood, hauled water. I’ve walked the trap lines and collected rocks for the sweat lodges. I’ve been in the courtrooms and on the protest lines, in the council chambers and in the lodges. I’ve travelled over 300,000 km to discover what reconciliation might look like.” The photos here, he says, “are a collaboration with everyone I’ve met.”

Chief Vern Janvier, Chipewyan Prairie Dene Nation; the photo was selected for a national human rights photography exhibition in 2017 at the Canadian Museum of Human Rights, under the theme of reconciliation.

Families along the Christina River during Chipewyan Prairie Dene Days, 2013.

Ty Herman, from Janvier, on the land with a large jackfish caught with a snare and pole during summer vacation from his school outside the reserve.

Marina Nokohoo, an engineer by profession who has chosen to focus on her culture and community, shown tanning a moose hide with her uncle Moose; the soft, beautiful hides are made into moccasins, gloves and vests, and are also used for ceremonies and offerings.

Joey Podlubny is a documentary photographer based in Calgary. He grew up in small-town Alberta, worked at newspapers and magazine, and now, as a freelancer, documents people and places often misunderstood. His new book is The Four Directions of Reconciliation.

WorkSpace Canada “examines the individual choices people make in a society where most of us are bound to gainful employment.” Weinhold has taken 4,000 photographs from across Canada for this project, all of them shot in black and white. Many have been purchased by Library and Archives Canada. The photos ... 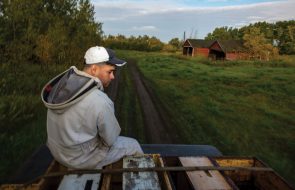 Who Keeps the Honey Industry Alive?

Every year hundreds of men from Central America and the Philippines come under the Temporary Foreign Worker Program to work as beekeepers in northern Alberta. In 2018 Canada produced $196,600,000 worth of honey. The industry indirectly contributes billions to other sectors such as bee-pollinated crops. Alberta alone produces  up to ...

Photographer Joey Podlubny wants to inspire people to look at the world differently. His latest project, the book The Four Directions of Reconciliation, documents the Chipewyan Prairie First Nation’s relationship to the land as they become increasingly surrounded by oil sands development. The Chipewyan Prairie Dene were the last group ...