…minus the conspiracy theories.

When the Senate returns to work in September, one of its first orders of business will be to debate and study Bill C-11, which amends Canada’s broadcasting legislation. Our Broadcast Act hasn’t been changed in a serious way in over 30 years. Back then we watched shows on TV, listened to music on the radio and rented movies at Blockbuster. Our phones were attached to the wall and used for making calls. We had strict Canadian content regulations and Canadian ownership requirements for commercial radio and TV broadcasters, whose programming was regulated by the Canadian Radio-television and Telecommunications Commission (CRTC).

Today conventional broadcasters—private radio and TV stations across Canada—are in crisis. They’ve lost advertisers to Google and Facebook and audiences to streaming services such as Spotify, YouTube, Netflix, Disney, Prime and Apple. The CRTC doesn’t regulate these international giants, and they don’t have to pay hefty licence fees or pay into Canadian production funds the way conventional broadcasters do. Technically, the companies have an exemption—but it’s an open question whether the CRTC has the authority to regulate them at all.

Bill C-11 would bring big corporate streamers within the ambit of the CRTC. The bill will, eventually, compel big corporations that want to operate in Canada to tithe into production funds that support Canadian filmmakers and recording artists. The government estimates—rather optimistically—that this could amount to $1-billion a year in funding for Canadian creators.

Bill C-11 will also demand that streamers make CanCon more “discoverable” on their sites, potentially by tweaking their algorithms to serve up more Canadian digital content to Canadian consumers—whether they want it or not.

I find it hard to embrace legislation that aims to spoonfeed Canadian content to audiences, as though CanCon were prunes or kale or cod liver oil, which we have to be coaxed to consume because it’s “good for us” rather than something we want because it’s cool and creative.

I worry too that the discoverability provisions could backfire. If YouTube, for example, keeps serving up CanCon you aren’t interested in, and you don’t click, you could actually prejudice a Canadian artist’s chances of being seen, by sending the algorithm the message that this isn’t content people want.

So, yes. There are lots of pros and cons to this legislation—and lots of room for the Senate to improve the bill by clarifying its provisions and ensuring it doesn’t have unintended consequences.

But for months now the debate about C-11 has been hijacked and poisoned by political actors, first in Ottawa, later in the Alberta UCP leadership race, who keep pretending the bill does all manner of nefarious things that it simply doesn’t do. My email, voicemail and social media feeds have been overwhelmed with thousands of messages from people who honestly believe C-11 is a censorship bill or Communist plot or scheme by the World Economic Forum to destroy Canadian democracy, to eliminate free speech and to end Canadian society as we know it.

This disinformation campaign has convinced many that C-11 will allow the government to remove their Twitter or Facebook posts, to censor their YouTube videos, to control everything they watch or read or listen to online, even to punish them based on vaccination status. None of that is true. The bill has nothing to do with text-based sites such as Twitter. It specifically exempts video posts made by non-commercial users. It has no provisions that censor anything. It does not regulate political speech. Yet the hysteria has reached such a fever pitch that politicians have been receiving threats of violence.

Our political ecosystem is now awash in paranoia, conspiracy-mongering and dark QAnon fantasies.

Bill C-11 is the latest whipping boy. But it’s part of a pattern. Our political ecosystem is now awash in paranoia and conspiracies and dark QAnon-adjacent fantasies. Mundane bills are misrepresented and distorted beyond recognition, turned into bogeymen, all the better to terrorize and bamboozle frightened, angry, vulnerable Canadians. As an independent senator, it’s my job to hold the government to account, and I’ve not been shy to point out flaws in C-11 and other federal legislation. But it’s damnably difficult to have a good faith debate about any public policy these days, drowned out by the cacophony of shrieking about cabals and treason and the WEF.

“Mainstream” politicians who cynically stoke these flames are playing with fire. Because once you destroy public trust and confidence in our political and democratic institutions…? You won’t just get it back if and when you’re in charge.

So by all means let’s have vigorous, impassioned debate about the issues that matter most. Let’s oppose bills we don’t like. But let’s argue about what’s actually in those bills, not about international plots and global conspiracies and imaginary monsters. We have enough real problems in our province and country without inventing phantoms to haunt our dreams.

Paula Simons is an independent senator and the host of the podcast Alberta Unbound. She lives in Edmonton. 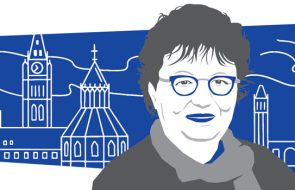