I attended classes and read books. I learned the mechanics of back labour and the action of intravenous pitocin. Experts taught me all about breech birth, water birth and afterbirth. Nobody, though, told me how I was supposed to feel when I ﬁrst saw my child. The classes and manuals oﬀered no instruction. I assumed my ﬁrst emotion would be joy. I thought happiness would wash over me.

We named him after my mother’s father. I’ve known my entire life that I would name a son Amedeo, and I suspect a part of me wanted a boy just so I could give him this name. I admire my grandfather. He was born in rural Italy in the 1920s. Mussolini forced him into a uniform during the Second World War, and he fought in Italy’s doomed North Africa campaign until the British took him to London as a prisoner. There, a Nazi bombing raid broke his back. After the war he walked across Europe to his hometown, where he married my grandmother. They had three daughters, but he left them when they were still young girls to find work in Calgary. He laboured for two years before earning enough to bring his family over the sea.

My grandfather is gentle and honourable and brave. He is the kind of father I want to be.

To read the entire article, from the November 2010 issue, click here.

Somehow eight years have passed since Amedeo was born, and fatherhood still bewilders me. I remember in particular an emotional afternoon in 2015 the day before I left on a two-month trip to the Middle East. Amedeo looked up at me from his Lego and asked why I was crying. I told him I was going to miss him, then I fled the room to fetch a tissue. When I turned around Amedeo was standing behind me. He too was crying. “Daddy, I want you to have this,” he said, then handed me a hundred-dollar bill.

“Where did you get this?” I asked, suddenly less concerned with my trip than with Amedeo’s apparent stash of C-notes. He told me his Baba—my wife’s father, Taher—had secretly slipped Amedeo the money during one of his visits. Amedeo had been hiding it among his toys for months. Now he wanted to give it to me because he was going to miss me, too.

Baba passed away suddenly in the summer of 2016. He, like my grandfather, was gentle, honourable and brave. Amedeo adored him. That my little boy had to mourn a grandfather before I did seemed terribly unfair. The elder Amedeo is 94 years old. He is a little slower than he was eight years ago and, if you ask my grandmother, a little less gentle. But he is still the kind of father I want to be.

I admit I haven’t always managed this. There are times when I could have been gentler with my words. More patient and more kind. I feel a different strain of fatherly astonishment during those moments. I stand baffled by my own small malfunctions. Suddenly there is a father in the room, and he is failing. Thankfully, though, the joys far outnumber the failures.

There is something else nobody told me about before I became a father: the phenomenon of conjoined happiness. Not long ago, I watched Amedeo ride his bicycle smooth and straight for the first time. I physically felt his surge of accomplishment in my own chest from across the park. When I make him laugh—not the little giggles but the full-body guffaws that shake and bend his body—my own stomach aches. I feel his joy every time he scores a goal in soccer, and during the 3D fight scenes in the superhero movies we watch together.

I’ve enjoyed countless happy moments with my wife, my family and my friends over the years, but Amedeo and I share something both mystical and visceral. A telepathy of bliss. It is our own superpower.

If you’ve heard of Ronald Ross Annett, that’s probably because his name graces the Writers’ Guild of Alberta’s award for Children’s Literature, established in 1982. Before Annett died in 1988, he was also recognized with honours from the City of Edmonton and the Province of Alberta and a medal for ... 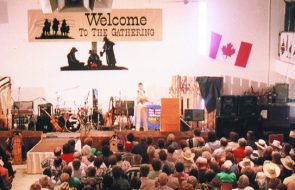 A Field Guide to Alberta Poets

It is the last night of the Nature Writing and Wilderness Thought Colloquium, a ten day writers’ retreat at a Benedictine monastery near the farming village of Muenster, Saskatchewan, and a group of 14 writers has motored from there in convoy to the lakeside village of Manitou Springs, home of ... 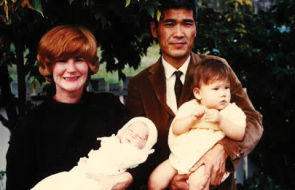 Shortly after the death of Edmonton writer Gloria Sawai, I was invited by her children, Naomi and Kenji, to go through her library and select whatever books I should like to keep. Obviously this was a considerable honour, and I was given it because I had been close to Gloria ...