The Little Series that Could

How and why Mentors, the TV series, quietly wows the world

Somewhere in the jillion-channel universe, wedged between the latest stateside “reality” entry and the ThighMaster infomercials, lives a homegrown, internationally acclaimed and distributed TV series. Into its fourth season, Mentors rolls fantasy, history, drama and hilarity into half-hour episodes chronicling the adventures of two teenagers who can summon historical figures to help solve their modern-day problems. This proud Alberta product, that doesn’t even try to look like it’s from anywhere else, enjoys a growing audience on five continents. And most Albertans probably don’t even know it’s on the air.

Mentors mines a universal fantasy. While we face challenges daily, we don’t have a device like the “VisiCron” to summon Einstein to talk quantum physics, Queen Elizabeth I to help us run for student council, or Casanova to help us romance our heart’s desire. But that invention is what computer wizard Simon Cates (Stevie Mitchell) and his new-age sister Crystal (Samantha Krutzfeldt) inherit from their cousin Oliver (now appearing only in reruns) and use to trigger each episode. Complications arise, and they learn more from their mentor than they bargained for. Beethoven is called in to help a friend cope with hearing problems, but a snafu brings him before his deafness, and when he learns his fate, it devastates him. Anne Frank seeks her first kiss from a skinhead. And Vlad Tepes (better known as Count Dracula) upgrades Simon’s bully-scaring request to attempted murder. Best of all, nobody else

“It flies in the face of the dumbing down of North American society. Who else, especially on Canadian TV, talks to kids about what it means to create art?”

has a clue about who these eccentric visitors are. History is unaffected and the mentors must return to their time after 36 hours, but the consequences of their visits linger like prized National Geographics.

“Mentors is the little series that could,” reckons its creator, writer and coproducer, Josh Miller. Having overcome all obstacles to generate the show (see sidebar), he and coproducer Margaret Mardirossian preside over a frenetic crusade to write, cast, shoot and complete post-production work on 13 new episodes each year on a budget of just over $5.8-million.

Olenik is part of a stalwart crew of 80 who have stuck it out in Alberta’s harsh climate for television and film production. Each year, they must decide whether to stay. Soundman Garrell Clark, a 28-year veteran, has declined work in B.C. which would pay him $1,000 more per day. “It’s almost a bad career move to stay here,” he claims, “but I’m a tried and true Albertan. This is my home.”

The prairie pioneer spirit of invention and economy lives at Mentors. Crew members revel in their abilities to make parliaments out of phone booths.

“You dream it up, make it as big as you want, we’ll build it,” affirms propmaster Wayne Jeannotte, whose creations for the series include exploding doughnuts, a talking Venus flytrap and a kissing cod.

Ultimately, though, all the dreams and all the money rest on the shoulders of the 15-year-old stars. Labour regulations and the need for on-set schooling restrict their availability and call for highly creative and efficient shooting schedules.

“It’s a huge challenge,” remarks first assistant director Jim Long. “We have to look after the kids because they’re only allowed a 10-hour day.”

“We’ve built a rapport with them,” concurs hairstylist Rose Rimmer. “It’s like having two more kids. We’re a family.”

“They’re such loveable kids, and real professionals,” notes cameraman Wes Doyle. “A lot of crew members go out of their way to chat with them, make them feel at home, and make it as easy for them as possible.”

Indeed, the two young professionals express the privilege of learning from the crew and their mentor guest stars. Krutzfeldt speaks equally insightfully on the show’s impact in less liberal countries, the importance of dramatic continuity, and the lost pleasures of sleeping in. “No ordinary kid has the ability to bring back these people as mentors,” Mitchell points out, “but by doing this, we can get people to think about the story and the lessons we’ve learned.”

Their offscreen mothers, Brenda Krutzfeldt and Wendy Mitchell, take it in stride. “It’s a very maturing experience to spend long days in an adult environment, with adult responsibilities,” observes Krutzfeldt. A history major, she loves the way the show translates history into something relevant to kids and families today. Mitchell appreciates the program’s appeal to all age groups.

Several theories explain the show’s appeal. Cast and crew mention its intriguing premise of bringing diverse characters to life in a contemporary setting and seeing a little-known side of them. In the series pilot, Einstein is summoned for his genius, but helps Oliver adjust to his parents’ divorce, Einstein having been divorced himself.

“It’s a universal theme of a kid growing up in knowledge,” says Doyle. “We’re all searching for answers at some point.”

“Mentors is always about more than it seems,” expounds writer Greg Kennedy. “While there are surface problems and challenges, there’s always a soul-stirring, deeper level where personal transformation takes place.”

International, national and provincial awards attest to the show’s meaningful, high-quality stories, illustrating universal themes with comedy and poignancy, but never with the cardinal sin of earnestness.

“The idea is king,” declares Miller. “We’ve opened it to pitches by freelance writers, who come up with creative ideas that we might not get in a closed shop. Each show has a point of view, and we’re not afraid to take on what might be considered sensitive topics.” Recent episodes deal with discrimination, homosexuality and teen sex.

“The series is so brave,” opines Casey. “It flies in the face of the dumbing down of North American society. Who else, especially on Canadian TV, talks to kids about what it means to create art?”

“Granted, other series are issue oriented as well,” continues writer David Wiechorek, “but they tend to approach their themes within the frame of a teen soap opera. Like Star Trek or the original Twilight Zone, Mentors can address these issues more creatively in a fantasy format.”

Mentors draws praise for respecting its audience and appealing to all ages, on different levels. “It lacks the pretentiousness and nearer-to-God attitude of some American shows,” says Brian Martel, who, as struggling playwright dad Norm Cates, gets hooked up with the Bard himself. “It deals with real-life issues, not sensationalized or saccharine-filled.” Martel cites the show’s honesty. “It won’t simplify too much or make it juvenile. It never talks down, or dumbs down, to kids. But it doesn’t take itself too seriously. No joke is too cheap unless it takes away from reality.”

Jane Sowerby loves her role as the sibs’ mom, Peggy Cates (she stamps her feet with glee at script read-throughs), and notes that the vivacious abstract sculptor is no stereotypical TV mom. “You really get to play on this show,” she enthuses.

Of course, there are the mentors themselves. Guest stars have included William B. Davis (Cigarette-Smoking Man from The X-Files) as Sir Arthur Conan Doyle, Saul Rubinek as Napoleon, Margot Kidder as Queen Elizabeth I, Joe Flaherty as basketball inventor James Naismith, and Gordon Pinsent as an aged (cousin) Oliver Cates. Actors play in broad strokes, from the slapstick, Gemini Award- winning performance of Matt Frewer (Max Headroom) as the fame-loathing Dr. Frederick Banting, to Michael Sarrazin’s haunting homage to Edgar Allan Poe.

Beyond the biographical details, these actors add original touches to bringing the mentors to life. “We decided early on with Josh to create our characters rather than rent them,” explains costume designer Jill Concannon, whose workshop suggests a time traveller’s closet.

But in the end, it’s about positive messages and a philosophy of letting kids pursue their own path. “Mentors uses an entertaining medium to help kids learn about themselves and the choices they’ll make,” suggests story intern Deb Chesley. “The main message is, ‘Figure out who you want to be.’”

So what’s ahead for Alberta’s quiet TV success?

Even though Mentors is seen in markets as diverse as South America, the Middle East and China, it took years to land an elusive American distribution deal. Fox Family and NBC Kids found the show’s winning mix of poignancy and hilarity “too educational” for American audiences. “They’re playing to the lowest common denominator rather than elevating,” sighs Mardirossian “I’m boggled by it.” Then this spring, two seasons of Mentors were sold to the new Discovery Kids channel, which is giving the show top billing on its Internet splash page as of this writing.

Through it all, its creator remains philosophical. “This has taught me that when the time is right for a project, it will happen,” concludes Miller. “And until that time comes, be patient, keep believing in the material and always work to improve it, so you’re ready when your number’s called.

Geo F. Takach is an award-winning screenwriter whose episode of Mentors featuring Emily Carr will air this fall. 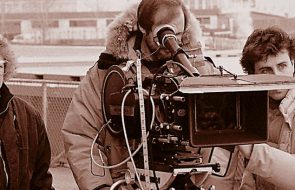 In 1919, a silent film called Back to God’s Country was, for its time, a huge commercial and artistic success, with a reported 300 per cent return to its Canadian investors. More surprising was the fact that this film starring the celebrated Nell Shipman, was shot on location in Lesser ... 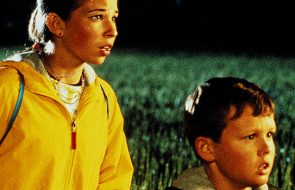 The Little Series that Could

Somewhere in the jillion-channel universe, wedged between the latest stateside “reality” entry and the ThighMaster infomercials, lives a homegrown, internationally acclaimed and distributed TV series. Into its fourth season, Mentors rolls fantasy, history, drama and hilarity into half-hour episodes chronicling the adventures of two teenagers who can summon historical figures ... 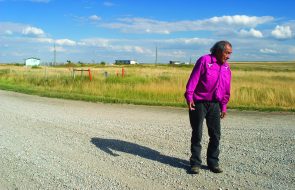 I still recall that morning as if it were yesterday. I awoke, startled, the way you do when your instincts sense something unfamiliar in your midst. A shimmering, raspberry-coloured light—unlike anything I’d ever witnessed—was slowly creeping through the tall, narrow windows of my new Calgary apartment. Everything this light touched exploded ...