The Trash of Two Cities

The old adage says that one man’s trash is another man’s treasure. In Alberta, it turns out that one city’s garbage is another city’s great accomplishment. Alberta’s two largest cities have taken radically different approaches to recycling. While the people responsible for residential waste in both Edmonton and Calgary stress the importance of recycling programs, foresight on the part of the provincial capital has resulted in that city recycling up to 40 per cent more of their residential waste than their southern neighbour.

It started in the late 1980s, when the City of Edmonton’s Waste Management Branch was searching for a new landfill site. Over and over, sites were rejected. Edmontonians did not want another festering pile of trash buried in their backyard. The very public search for a new site went on for 10 years, with heaps of input from citizens. Soon, three main areas of concern emerged: residents wanted a waste system that was affordable, convenient and good for the environment. So the city, headed by a progressive council, recreated their entire waste management system, implementing curbside recycling in 1988, before the recycling movement had built up much steam.

A year later, they switched from blue boxes to blue bags, meaning citizens (who had identified convenience as an important concern) no longer had to sort their recyclables. “It’s simpler and more convenient, so more people participate,” says Connie Boyce, director of communications for the city’s waste management branch. “Bags are bigger than boxes, so you can recycle more material. And the bags protect the material [from rain or wind].”

All household recyclable materials are simply stuffed into blue bags, picked up from Edmonton curbs and taken to the $12-million Materials Recovery Facility (MRF) on the city’s east side. There, milk cartons and juice boxes are collected, later to be turned into tissue paper, napkins and toilet tissue; glass will be crushed for use in reflective paint; discarded paper will be made into newsprint, cardboard—even asphalt shingles. One of the most advanced facilities of its kind in North America, the MRF processes roughly 30,000 tonnes of recyclables every year.

An estimated 84 per cent of Edmontonians regularly participate in the blue bag program (likely even more, as that figure is based on a short-term study). A monthly fee—$13.25 for single-family dwellings; $8.61 for multifamily—is clipped on to all Edmontonians’ utility bills to fund the program. The cost, says Boyce, “hasn’t been an issue.”

Edmonton’s curbside recycling program has kept more than 60 per cent of household waste out of the landfill. Although plans are in the works in Calgary to increase recycling, the city still lags sadly behind.

Curbside recycling, along with a composting program and other waste-reducing efforts, has resulted in Edmonton diverting roughly 60 per cent of all residential waste away from landfill. Before these programs started back in 1988, Edmonton was recycling about 14 per cent of residential waste, with the remaining 86 per cent ending up in landfills. Boyce is proud of the way Edmontonians have embraced the programs. “We think we’re capturing most of (the recyclable material) out there,” she says.

Calgary’s recycling history began in 1991 when the city conducted a pilot project of residential recycling options. Curbside recycling and drop-off depots were tested, with the latter being adopted by city council for its balance of cost, volume of material collected and rate of participation. “Calgarians chose the depot system,” says Mike Saley, manager of strategic planning and diversion for the city’s waste and recycling services.

By 1992 the first seven community depots were in place, accepting newspapers, glass and metal cans. Today there are 47 depots in the city. Calgarians can drop off newspapers, magazines, mixed paper, cardboard, metal cans, glass, milk cartons, plastic milk jugs and plastic bags. Unlike the City of Edmonton, which owns its state-of-the-art MRF, the City of Calgary disperses the materials collected at its depots to local brokers who, in turn, pass them on to various processors for treatment, a system that could break down under higher participation rates if a broad curbside recycling program were to be implemented. “Certainly there would be additional facilities and resources required for proceeding with curbside recycling,” says Saley.

It’s estimated that 71 per cent of people use the depots at least once a month. In 2004, 29,941 tonnes of material was recycled. Saley says the depot program has served Calgarians well. Calgary’s residential waste generation has remained constant, at about 3,987 tonnes each week since 1993, despite a 23 per cent growth in population over the same period. Still, the department estimates that 85 per cent of residential waste deposited at Calgary landfills could be recycled. In 2003 54,500 tonnes of recyclable paper went into Calgary landfills. And with landfills being the primary source of greenhouse gases in Calgary, the city has accepted the obvious: more can and should be done. In fact, by 2020 the city wants 80 per cent of residential waste to be recycled and just 20 per cent going to landfill.

To achieve that goal, the city is reconsidering curbside recycling. More than a decade after opting for the depot system, they’re revisiting the approach that has worked so well in Edmonton. A one-year pilot project implemented between spring 2004 and 2005, saw curbside recycling offered to roughly 2,000 homes in Calgary (selected through a lottery). The communities of Huntington Hills, Mount Pleasant and Cedarbrae were provided with curbside pickup of recyclable materials. Between May and November, the city also offered to pick up yard and vegetable food waste in those communities, the first time residential pick-up of such materials has ever been offered in Calgary.

The waste and recycling services department is collecting information on the response to the pilot program (which even in the early stages, Saley said, was “received very positively by participants”) to present to Calgary city council in the fall.

Edmontonians did not want another festering pile of trash buried in their backyard.

“We’ll provide the findings and facts to council and Calgarians and they will determine the recycling system that best meets their needs,” explains Saley.

But in the years since Calgary chose the depot system, a number of private companies have cropped up, offering curbside recycling to those Calgarians for whom depots weren’t an attractive option. Calgary’s waste services department acknowledges that the potential impact of a comprehensive, city-wide curbside recycling program on those private companies is of concern. Will concern for those private enterprises outweigh the myriad potential benefits of a curbside program? In entrepreneurially minded Calgary, that is a real possibility.

Meanwhile, Saley says, Calgary’s re-examination of curbside recycling today is not an attempt to play catch-up with Edmonton. “Management of waste and recycling is an interesting topic and there is not one major city in Canada that does it exactly the same as another,” he says. “There are many good reasons for this, such as general attitudes and opinions, cultural viewpoints, historical practices and economic constraints. Edmonton has been well served by the system they have developed, and the same is true of Calgary. Both curbside recycling and depot drop-offs have their strengths and weaknesses. Both systems are dynamic and continually improving.”

Some faster than others it seems. 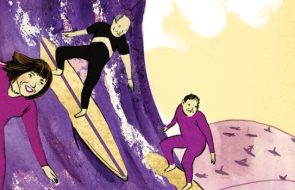