A Walk in the Park

How can we really know our politicians? One man’s quest to understand what makes Danielle Smith tick

Danielle Smith is ready for a brisk stroll with her dogs. At Calgary’s Nose Hill Park—a veritable dog-heaven-on-Earth—we remove our mitts and shake hands before she reaches for the back latch of her beige 1998 GMC Jimmy and says, “Look out. Soon as I open this, they’re gone.”

One might have said the same about her a year ago. Smith is awake, done up in makeup and peacoat. It’s only 8:00 a.m., but this isn’t her first interview today and she has six scheduled after. She is hyperactive and disciplined in the best sense of both words, taking her coffee black as if to imply milk just takes too long to pour. At 38, she is a new pup by Alberta Legislature standards (average MLA age currently 53.9)  and welcomes the fray of politics with the same enthusiasm that her dogs, now roving the underbrush, welcome being unleashed.

“I’m a dog person,” she says. “They’re so affectionate, so happy with simple things.” As we walk she refers to Turk, her chocolate-coloured Chesapeake, and Caine, her labradoodle, as “her boys.” Evidently, they’re a notch or two up on the family totem pole from her scratchy, moody cat, Ziggy.

“Libertarian” is what Smith lists on her Facebook page under “political views,” which proves how it is a term of great ambiguity. It can mean a selfish cat willing to claw someone’s eyes out or it can mean closer to what Smith means, which, she explains, is her optimism about the private sector.

This much, at least, is fair to question, since Smith seems a far cry from the Wildrose of yore. What was years ago a cold-hearted coterie of unforgiving, purple-faced, fanny-packed, God-fearing, abortion-eschewing, gay-bashing, Trudeau-loathing rednecks is the far more mainstream party she leads today (forgot gun-toting). If party politics in Alberta were separable by pedigree, the Wildrose was once a remarkably staunch, aggressive breed—the sort you’d pull your kid away from petting.

Smith has already done much in the way of moderating that tired trademark. In person, she immediately comes off as genial, energetic and intelligent—much like Turk and Caine. It’s likely why national media pay her so much attention and why she took time in her acceptance speech as leader to note: “Perhaps understandably, we’ve been doing a lot of cringing and ducking to avoid being labelled ‘extremist.’ We should now stop. It’s undignified.”

“I’m a dog person. They’re so affectionate, so happy with simple things. Cats are too libertarian.”

But how to truly know whether today’s Wildrose Alliance is like Smith appears—young, vibrant and with-it? Does that make it libertarian too, and if so, which kind?

Voters choose parties and candidates the way one does a pet dog. Where party policy is concerned—the general knowledge and proclivities—one first researches breed and various mixes of breeds. Where personality is concerned, one must examine individual lineage, history and temperament. No matter how lovable an individual pug may be, for example, if you’re not a pug person, you’re not a pug person. But Smith could be that rare pick of the litter. The one that dazzles. The public persona that does for the party what Don Cherry did for the bull terrier. The exception that supersedes breed.

Halfway around the park, Smith, her boys and I hear a familiar howl. “Coyotes,” I say.

“Coy-otes.” She corrects in purebred prairie parlance, pointing out that “coy-o-tees” is Spanish, “coy-otes” is Albertan.

Smith’s a homegrown gal with the slightest accent-tinted tongue like any fair dame born and raised in Cal-gree. She lives today only five blocks from where she grew up riding her bike and babysitting in Mount Royal. Her parents live in the north end of the city. They spend Sunday evening suppers together.

Her mom and dad were still teenagers when they started a family, having five children before the age of 30. Both worked: mom with Canada Post and the City of Calgary and dad in the oilpatch. The Smith family’s two dogs were given away when Danielle’s younger brother was born. To paraphrase: Five kids. Two dogs. 20-year-old parents. Do the logistics.

She spent her earliest working years at a smoky bingo hall as a pushcart girl selling pop and bingo cards when it was still legal for minors to sell cigarettes. She worked for McDonald’s, the quintessential employ of adolescence, where she learned and remembers to this day an annoyingly perky precept: “If you have time to lean, you have time to clean.” In university years she did what students do, serving at Cannery Row in downtown Calgary and the Shark Club in downtown Vancouver. She’s had jobs, lots of them, which is good—sort of like the necessary vet shots to look for when buying a puppy—real-life experience with real working folk. All this before entering the dog-eat-dog realm of public affairs, first with the Fraser Institute, then the Calgary Herald, Canadian Federation of Independent Business and now Wildrose Alliance.

Her time with the Herald and Global TV makes her both a natural in front of microphones and notepads and equally circumspect with media. As with walking a dog, interviewing is an exercise in trust. Even the most well-behaved dog never truly knows if it will receive a Snausage or get kicked in the ribs. Politics works much the same way.

The coyotes heard earlier are now within sight, so Smith hollers for her boys and a small amount of panic sets in before both are safely on leashes and away from the wild dogs. “I don’t feel like taking on a pack of coyotes this morning,” she says as we move at a gait. Her unflappable poise in this sticky situation seems evidence of her—if I may—dogged discipline over the past months. I can’t help but ask: “Do you sometimes feel like you’re taking on a pack of coyotes?”

“Sometimes,” she answers coolly. “But their bark is usually worse than their bite.”

Peter Worden is from Ottawa and studied political science at Simon Fraser University. Like a dog, he instinctively circled Canada several times before flopping down in Alberta. He has no pets. 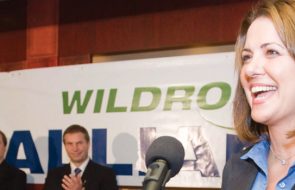 If Danielle Smith ever had a youthful flirtation with the left, she’s kept it well hidden. From campus to career conservative, Smith has found a comfortable home on the right side of the spectrum, and it has served her well. Smith graduated, after nine years of study, from the University of ... 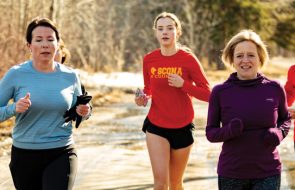 It's a half hour before dawn when Rachel Notley emerges from her hotel elevator, and I barely recognize her. She’s wearing her running clothes and a battered pair of Asics Gel running shoes. Despite having arrived in Calgary late the night before, she has a schedule to keep and she’s eager ... 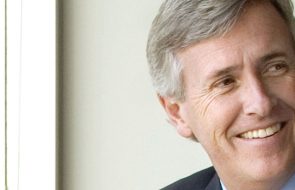 Back to the Future

It is just after 11:00am, June 14, 2006. Jim Dinning takes the stage at Calgary's Vertigo Theatre, located at the base of the Calgary Tower, perhaps the city's most symbolic corporate landmark. Behind him stand 27 Tory MLAs, a portion of the 250 people in total who have gathered for ...