When Premier Ralph Klein wrotea letter to the president of the University of Alberta in 1999 demanding that the Parkland Institute be shut down, he concluded it by stating: “One might ask if Parkland can provide a list of its practical accomplishments.” This year, as the Parkland celebrates its 25th anniversary, we feel it’s a good time to reflect on how our institute has impacted Alberta’s democratic debate and why it’s more important than ever.

Klein wanted to silence the Parkland Institute after a speaker at our conference harshly criticized his government’s response to growing poverty rates in the province. It wasn’t the first time the premier reacted publicly to a Parkland book, report or event, and it wouldn’t be the last. Throughout Klein’s tenure as premier he referred to Parkland as “factually challenged,” “communist,” and “spending too much time in liquor stores.”

Klein’s reaction to Parkland’s work is important because it speaks directly to the institute’s reason for existence. Parkland was founded in 1996 as a direct response to two dynamics. First, after the 1993 provincial election, the only political parties represented in the Alberta Legislature had run on platforms of severe austerity and privatization. At the same time, the media landscape in Alberta had changed to the point where the only ideas being reported on and talked about were those coming from far-right sources such as the Fraser Institute. The Parkland Institute was created with the explicit purpose of broadening the scope of debate in Alberta by challenging the dominant paradigm and the regressive policies coming from the Legislature with well-researched and evidence-based alternatives.

Of Parkland’s many “practical accomplishments,” perhaps one of the most significant is the creation of progressive debate and policy alternatives. Since the 1997 launch of our first book, Shredding the Public Interest, by Kevin Taft, Parkland has published six books and more than 100 peer-reviewed reports, held numerous conferences and events, and worked tirelessly to get an airing in both mainstream and alternative media. All of this work has not only resulted in the development of public interest alternatives to government policy but served to put those alternatives into the hands of individuals and organizations across the province—people and groups willing and able to use that information to influence public discourse and ultimately government policy.

One of the best examples of Parkland’s influence on public discourse over the years is the issue of natural resource royalties. In 1999 we published a report highlighting how little Alberta was collecting in royalties compared to Alaska and Norway. At the time, no one in Alberta had thought to question whether Albertans were receiving a fair amount for their collectively owned resources, nor dared suggest that royalties should be much higher. Although the report received a rough ride from government and industry, Albertans noticed. By 2006, after continued research and active dissemination, the notion that royalties were too low had entered the mainstream to the extent that it was debated in the Progressive Conservative leadership race. Premier Ed Stelmach felt compelled to launch a high-profile review. Since then, Parkland has continued to promote alternative royalty policies, but also expanded our energy research to include analysis of the economic and political power of fossil fuel corporations in the province and the serious implications for our democracy and the global climate crisis.

Parkland has also had significant influence on the debate over the privatization of public services. Municipally, Edmonton city councillors were able to use Parkland research to stop the privatization of EPCOR, the largest municipally owned power and water company in Canada at the time. This has resulted in significant economic returns for Edmonton. To this day, every time the idea of selling EPCOR or other municipal services is considered, Edmontonians, the media and city councillors reach out to Parkland Institute for its research and commentary.

Thanks to Parkland’s assessment of the failures of liquor store privatization in Alberta, it has also become the go-to source for information and media commentary when any provincial government, anywhere in the country, considers the possibility of increasing privatization in their liquor retail sector.

Two areas where Parkland’s work against austerity and privatization have had the most impact are healthcare and seniors care. With two bestselling books and dozens of reports making the case for public funding and delivery of healthcare, Parkland research has been critical in helping Albertans fight back against the numerous incursions by our governments against the public healthcare system, from stopping Klein’s “third way” to challenging Kenney’s privatization of Alberta’s lab services.

Likewise, Parkland’s ongoing exposure of inferior results in private elder care compared to public care—which outcomes have led to today’s crisis in seniors care—has been at the core of the pushback by community advocacy groups against increased privatization of seniors care.

Parkland research, commentary and events will continue to play a central role in providing Albertans with the information and alternatives they need to actively engage in the issues and decisions that affect their lives.

Given that Albertans now face a UCP government agenda of austerity and privatization, the work of the Parkland Institute seems more important than ever. As the Kenney government brands any dissent as anti-Albertan, uses its war room to attack any questions about Alberta’s energy and environmental policies, and brings in legislation such as Bill 32 to silence the voices of working Albertans, the space for public debate narrows. Unfortunately, given the mainstream media is less open to dissenting voices, the health of our democracy and vibrancy of our public spaces are at risk.

But thanks to Parkland’s many supporters and growing network, its work of publishing and disseminating policy alternatives will continue to inspire a healthy progressive vision of the future of Alberta. By creating space for public conversations such as our 25th annual conference, running November 19–21, 2021, we hope to inspire people to make their voices heard about the Alberta and world they want. This is the accomplishment Ralph Klein and other political and corporate elite feared—and failed to silence. The Parkland Institute is proud of our accomplishments and we know we will continue to be an essential voice in our democracy. 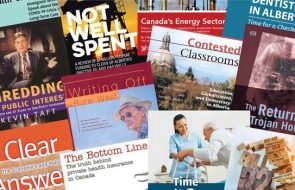 When Premier Ralph Klein wrotea letter to the president of the University of Alberta in 1999 demanding that the Parkland Institute be shut down, he concluded it by stating: “One might ask if Parkland can provide a list of its practical accomplishments.” This year, as the Parkland celebrates its 25th anniversary ...