Ten minutes east of Taber, as the semi-trailer flies, is Lamb Weston Canada ULC, owned by the $23-billion ConAgra Foods of Chicago, USA, which turns Alberta-grown potatoes into fries, including waffle, curly, straight, wedge, crinkle and dipper-cut varieties, but “does not”—per a former employee’s indeed.com review—“follow Alberta Labor act very well.” In Taber, Lantic Inc. converts 150,000 tonnes of beets into granulated, liquid and icing sugar annually, though “it feels like you are managed by a chicken with its head cut off.” Across the road, PepsiCo makes Lay’s, Miss Vickie’s and Ruffles (“Hard part is standing on concrete for 8 hours.”). Just before Coaldale is McCain Foods, owned by the world’s largest French-fry company (2019 sales: $9.5-billion), which processes 33,000 pounds of potatoes hourly even as “morale in the plant is very low.” In Lethbridge, PepsiCo (again) turns a corn slurry into all of western Canada’s Doritos and Cheetos (“equipment breaks frequently and they still expect you to meet the shift’s produced-case numbers regardless”).

Just north of here, on the equivalent of seven football fields, is the latest addition to Alberta’s junk food corridor, Cavendish Farms. The City of Lethbridge sold the land in 2016 for $7.79-million to the Irving family, billionaires who’ve turned New Brunswick into a “company province”; the city then spent $41.5-million to service the Irvings’ new French-fry factory (for, among other things, “irrigation adjustments”). Alberta’s NDP government and the federal Liberals—whose finance minister at the time was married to an heir to the multibillion-dollar McCain fortune—kicked in another $22-million. Jason Kenney’s UCP later teamed up with Trudeau to give $652-million for new irrigation in Alberta, enabling local farmers to grow more potatoes, sugar beets and corn, and local junk-food factories to flush away more effluent. The fed’s $407.5-million is a loan at 1 per cent over 35 years; Alberta’s $244.5-million is a gift from Kenney, who opposes politicians “picking winners and losers, because the taxpayer almost always loses,” and who long ago “worked with Ralph Klein to implement ‘No More Boondoggles’ legislation, which ended corporate welfare in Alberta.”

The Irvings announced the plant’s 238 jobs in 2017, halfway into what Kenney recalls as the “job-killing” Rachel Notley era. A beaming Notley and Robert K. Irving posed with shovels at that year’s ground-breaking; a beaming Kenney, at the 2019 ribbon-cutting, called the factory “a vote of confidence in Alberta.” The UCP leader, a career politician whose current taxpayer-funded salary is $186,180, deemed it “great news” for people “who will earn a living” at Cavendish, a company that in 2017 paid “case openers” and “flume persons” $12.20/hr. and $14.45/hr. to start, respectively, at its existing Lethbridge plant, with a 60-cent top-up for the graveyard shift.

Cavendish Farms opened to some fanfare. Lethbridge outbid several US sites for this “thrilling” factory, said Lethbridge mayor Chris Spearman, which is “what happens when industry and municipalities work together.” The Irvings, who have extracted huge property-tax concessions on their liquid natural gas refinery from the City of Saint John, New Brunswick, and who in 2018 abruptly closed their potato-packaging facility in O’Leary, PEI, laying off all its workers, called it “a great day” for Lethbridge. “There were many reasons we were able to expand in Alberta,” Robert K. Irving said. The Cavendish president, whose $14-million Florida mansion is near Bill Gates’s and features stables and an equestrian ring, included among these “the can-do attitude of our Lethbridge employees.”

Nine months after fast-food joints began serving new Cavendish Farms CrispToGo™ ⅜” straight cut fries—which “always arrive extra-crispy and delicious, so customers order again and again”—Kenney declared he’d cut corporate taxes to entice companies such as the Irvings’ to open in Alberta, where the honourable minister of economic development at the time, Tanya Fir, noted, “investment fled… thanks to the socialist dumpster fire that engulfed our economy for four years.”

The UCP leader—who once tweeted to a supporter “Keep up the great work for free-market farming!”—aims to smother the flames of socialism with hundreds of millions of dollars in public subsidies, including, in 2020, $27.8-million for an “agri-food hub” (the City of Lethbridge kicked in a further $25-million). In 2016–17, farmers received $6.1-billion in direct subsidies from governments in Canada (e.g., crop insurance, income support) and hundreds of millions more in publicly funded research, altogether comprising a quarter of Canada’s agricultural GDP. Contrast this, advises UCP Finance Minister Travis Toews, to “public sector activities”—teaching, nursing—“which are paid by withdrawing money from the economy.”

Junk-food companies receive generosity from more than just the public. Lantic, for instance, informed Taber-area sugar beet farmers in 2015 that it would replace local beets with raw South American sugarcane if they didn’t sign a new deal with the company, Canada’s only producer of sugar from beets. Farmers soon agreed to terms with Lantic, whose CEO within two years saw his annual pay double to $1,063,892.

All of this largesse is in aid of Alberta’s plan to “aggressively” increase agri-food exports to $16.6-billion by 2023, a 43 per cent increase from 2018, which scheme to truck tens of millions of hashbrown patties and cheesy tater tots to the US is less often called a boon to ConAgra’s or McCain’s shareholders than it is dubbed “a tremendous source of good jobs,” “feeding the world,” or, paradoxically, “strengthening local food security.”

The Irvings as of 2012 were “the top french-fry supplier for Wendy’s,” a junk-food chain that gives its customers a Square Deal™ by posting nutritional info online. A large fries at Wendy’s has 480 calories, a quarter of an average adult’s daily needs, plus 23 grams of fat and 370 milligrams of sodium. A Wendy’s bacon poutine has a third again more calories, 70 per cent more fat (most of it saturated) and four times the sodium.

Deep-fried potato sticks—as well as Doritos, Ruffles, icing sugar and the seasoned criss-cut battered waffle fries cooked up at Lamb Weston Canada ULC—are not high on the Canada Food Guide list, which cautions citizens to avoid “most deep-fried foods, like French fries” and advises “choose foods that have little to no added sodium, sugars or saturated fat.” “Processed or prepared foods… are linked to chronic disease risk when consumed in excess,” said a Health Canada director upon releasing the new Guide in 2019, though the lobby group Food and Consumer Products of Canada called the recommendations “not fair or practical.”

Kenney funded a 248-page Alberta Nutrition Report Card in 2020 that ranked dietary risks “second only to tobacco as contributors to premature mortality”; he also funded in 2020 the twinning of a 46-km stretch of Crowsnest Highway leading to Lamb Weston Canada ULC at a cost to taxpayers of $150-million. If the premier is conflicted, he’s not alone. Lac Ste. Anne-Parkland UCP MLA Shane Getson in 2020 lamented that workers lack drive “because they make more on CERB eating Cheezies and watching cartoons, I guess,” while PC vice-president Jordan Lien in 2015 took to Facebook to ridicule Notley’s health minister, who he said might want to ban “all sodas, candy, processed sugar products… and fast foods.”

Early in the 2020 pandemic, Health Minister Tyler Shandro declared that Alberta, to protect citizens’ health, would distribute 20 million masks through fast-food drive-thrus. Among the outlets chosen were McDonalds, whose Canadian CEO calls criticism of his company’s preference for low-wage temporary foreign workers “bullshit,” and Tim Hortons, a company that Maclean’s once dubbed “The Canadian icon Canadians won’t work for” and whose franchisees include UCP MLAs Roger Reid (Livingstone-Macleod) and Tracy Allard (Grande Prairie). Alberta, noted Shandro, was the only province to distribute protective gear this way, a method that reportedly saw workers “literally tossing as many masks as possible to customers to get rid of them ASAP.”

Kenney says Alberta spends too much on public healthcare, instead prescribing “efficiencies” and “choice in competition [to] get better results at lower costs.” A 2019 National Post report offered another diagnosis: “In Canada, where more than one in four people live with obesity, related healthcare costs are as high as $7-billion and are projected to increase to nearly $9-billion by 2021.” Jessica Lieffers, postdoctoral fellow at the University of Alberta, an institution whose funding Kenney cut by 26 per cent in his first 18 months in office, pegged the direct and indirect healthcare costs of junk food in Canada at $13.8-billion. The UCP plan to distribute health equipment to drivers idling in fast-food lineups was officially in aid of “saving money.” “We’re looking forward to welcoming lots of Albertans at our drive-thrus in the coming days,” said the CEO of A&W.

Evan Osenton is the editor of Alberta Views. 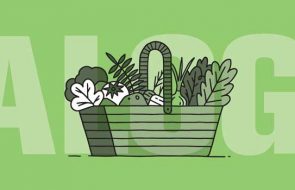 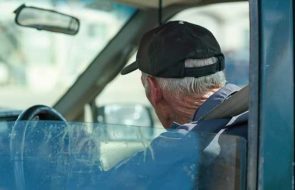 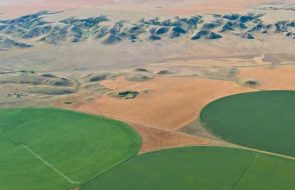 The only sound for miles is tires crunching gravel. Eric Musekamp drives north, home to an address he rarely gives out. He has to be careful: You don’t win many friends in these parts by advocating for farm workers. “I’m looking at abandoned homesteads in every direction,” he says over the ...