On Friday, July 24, at 4:00 a.m., 25 people deployed onto the grassy space across the street from Edmonton’s downtown baseball stadium. We erected 10 tents and set into motion a plan to welcome the houseless community to the site—intentionally using this term rather than “homeless” because a home is much more than a physical space.

We called the site Pekiwewin, which is nehiyawewin (Cree) for “inbound” or “coming home,” and established it as an anti-police-violence, emergency relief and prayer camp that uses a harm-reduction approach for people sleeping rough. The camp is led by Indigenous 2-Spirit women and femme folks working in solidarity with First Nations, Black, LGBTQ2S and settler allies.

As organizers we’re focused on demands that have arisen from the societal hardships and abuse witnessed by the people, now 400 daily, who live and use services at Pekiwewin. We’re calling for a formal review, using a harm-reduction lens, of racist bylaws—including trespassing and loitering fines—that perpetually erode the security, safety and dignity of people with no fixed address and communities with lived experiences of houselessness. We want an end to the destruction of their property and to forcible removal of encampments.

We demand that city council divest $39-million from its police budget. We want the City to use that money to create more transitional support services for community members who were previously institutionalized, the key demographic of which are urban Indigenous people.

The land Pekiwewin sits on has been used as a ceremonial and gathering place for Indigenous people since time immemorial. The municipality has repurposed this land as a parking lot for baseball fans. The inherent disrespect in the appropriation of this sacred space makes it imperative that Edmonton’s municipal government commit to a more appropriate use of this land.

Poverty, disenfranchisement and police violence are also public health crises in their own right.

Workers from frontline social services agencies have helped to create and operate Pekiwewin camp. Organizers have no budget or formal agency support. Workers dedicated to Pekiwewin have supported more than 150 tent homes without funding from federal, provincial or municipal governments; we rely on donations for our six outhouses. Volunteers are spread thin, but we staff the camp around the clock. We have provided 24/7 access to life-saving harm-reduction supplies and other health care to dozens of community members.

A huge barrier to services and safety in our community is the lack of free public transit, which denies to many people the right to move between spaces. The City of Edmonton was able to provide transit on a free, emergency basis during the height of the COVID-19 crisis. It can and must do so beyond the pandemic as well.

But the opioid crisis, and the fact that poverty, disenfranchisement and police violence are also public health crises in their own right, have been ignored and denied by multiple levels of government. The Government of Alberta has slashed funding and removed supports for supervised consumption sites. Deaths by overdose will once again increase in Alberta despite harm-reduction having been proven to work. The number of tents at Pekiwewin grew this summer as the City of Edmonton closed emergency shelters at the Kinsmen Sport Centre and Expo Centre.

Pekiwewin meets people in the community where they’re at. By safeguarding people’s dignity and acknowledging the complex systemic onslaught of oppression that our community members are up against, Pekiwewin has, for many people, become home. The camp will remain so for as long as is necessary to force society to make systemic changes.

Shima Robinson is the media liaison for Camp Pekiwewin. 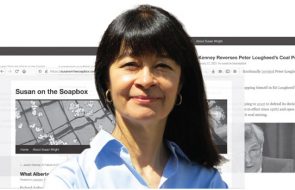