Faces of the Lakeside Packers Strike

In the Middle of October 2005, members of the United Food & Commercial workers, Local 401 went on strike at Lakeside Packers in Brooks. The local had been certified in 2004 as the bargaining agent for the meat plant workers at Lakeside, which is owned by US giant Tyson Foods Inc. On its website (www.tysonfoodsinc.com), Tyson claims to be the “world’s largest processor and marketer of chicken, beef and pork.” it had sales of $26.4-billion US in 2004. It owns 123 processing plants and has 114,000 employees in 20 countries.

To prevent an earlier strike due to stalled negotiations between the union and the company, the Government of Alberta created a disputes inquiry board of one person, John M. Moreau, QC. Moreau issued his report on September 13, 2005, in which he recommended “an appropriate first collective agreement between these parties.” The members of Local 401 overwhelmingly endorsed the proposed contract, but the company refused to sign. The local went on a legal strike to get a first contract.

There were numerous issues involving overtime, holidays and breaks, but the general concern dealt with human dignity and respect on the shop floor. In a plant employing several thousand workers, wage grids and standards vary. Likewise, the workers at this plant come from many backgrounds and include many immigrants and refugees. There are about 1,300 visible-minority refugees in the town of 13,000; many are government-sponsored refugees from countries like Sudan, which has been torn apart by a long civil war.

The large proportion of immigrants and refugees at Lakeside is similar to the Cargill Foods plant near High River. However, in Cargill’s case, many workers are bused from Calgary because of the plant’s proximity to the city. This isolates immigrants, who traditionally have turned to cities to find employment and mutual support; it also creates tension within the traditional rural and small-town culture of a place like Brooks.

The strikers received a little over $350 per week in strike pay, about half their normal weekly earnings. They also faced hostility: The area’s beef producers, who suffered through mad cow disease and the US embargo on live cattle shipments, were not sympathetic to a strike that could adversely affect their income. Likewise, the Alberta government—with its pro-business and pro-Us stance—has traditionally not been sympathetic to the workers, but was generous with its subsidies to meat packers during the BSE crisis.

Ordinarily, up to 4,500 cattle are slaughtered daily at the plant, which maintained a reduced level of production during the first month of the strike because non-strikers crossed the line and worked. (Unionization passed with a majority of only 47 votes.)

The last time the UFCW tried to unionize the plant was in the 1980s, when Lakeside was much smaller; that strike failed after going on for years.

This strike was different. it drew national media attention and garnered sympathy from both inside and outside the province for the strikers.

These photos of the strikers were taken on October 21, 2005, when the strike was still new and fresh. There was no picketing that day, out of respect for two strikers who had died in a car accident the previous day. The photos were taken next to an industrial building beside the union local’s headquarters. It was a cold, foggy morning in Brooks, but gradually the sun lifted the damp mist.

The faces of the strikers reflect the diversity in age, race and gender that is typical of workers at Lakeside. They are the faces of the new Alberta.

A week after these photos were taken, management from Tyson’s home office in the US flew to Alberta and negotiated a first contract. Fifty-six per cent of the workers ratified their first collective agreement in early November. The strike was over, and this time it had worked. In Alberta’s centennial year, in a province reputed to be anti-union, the union had won.

George Melnyk is a cultural historian and photographer. 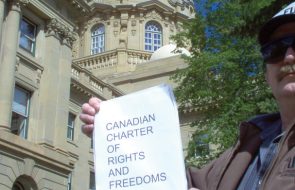 On August 20, 1999, farm worker Terry Rash tipped an old water truck into a ditch south of Taber. Damage to the truck was minimal, and Terry and his passenger were unhurt. They sent word back to the farm for help. Their boss, farm owner Charles Henry Beauchamp, arrived at the ... 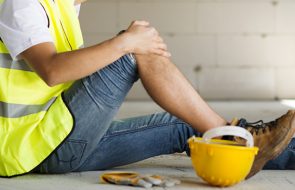 On October 21, 2009, a man with a high-powered rifle took several hostages and held them for nine hours at the Edmonton offices of the Workers’ Compensation Board (WCB). Patrick Clayton was an injured construction worker and a disgruntled WCB claimant. Thankfully, the siege ended with a whimper, not a ...

My wife and I spent our last day of our summer vacations in 2019 on a picket line with healthcare workers at Edmonton’s old General Hospital. Most of the cleaners, healthcare aides and nurses at the information picket were women of colour. Like public-sector workers across the province, they were ...