How I Chose Calgary

The sheer optimism got me.

Never underestimate the power of anecdote. You can cite as many statistics as you like about dropping crime rates; none of it will have the impact of a neighbour’s cousin’s friend who was mugged downtown just last week. Advertisers know this as well, how a single testimonial will sway opinion more than all the pie charts and bar graphs one can muster.

It was the power of personal testimonials that brought me back to the West. It’s why our first son was born a Maritimer and our second a Calgarian. Several years earlier, my wife and I had settled in St. Andrews, New Brunswick, a lovely Loyalist town on the shaded shores of Fundy. St. Andrews was sleepy, almost dreamy, and we might very well have stayed—but I am an Albertan born and bred, and as such, the word “opportunity” holds an almost talismanic quality for me. St. Andrews, for all its charm, didn’t offer much in the way of opportunities for our children.

We needed someplace bigger. I was thinking Halifax, maybe Ottawa. My wife was looking to Vancouver and its outlying towns. Places with the word “Port” or “Moody” in their name.

When one spouse wants to move to Halifax and the other Vancouver, you know you’ve reached an impasse. But as luck would have it, in the midst of this, I was sent on an extended cross-Canada jaunt. This was part of a promotional tour arranged by one of my publishers in a desperate attempt at recouping some of their ill-advised investment in me. When I read the itinerary they’d sent, it was a roll call of possibilities, starting with my own first choice of Halifax and then moving on through Montreal and Ottawa, and then Toronto, London, Hamilton, Winnipeg, Edmonton, Calgary, Vancouver and Victoria.

I’d be meeting book publicists, arts reporters, radio and TV hosts—people engaged with their communities. A perfect chance for a sly cross-Canada survey, I decided. And so, in every city, I asked the same question. “My wife and I are considering moving to [FILL IN APPROPRIATE PLACENAME], what do you think?”

The results were informative, to say the least. In every city I visited they responded the same way. Whether it was Winnipeg or Vancouver or Ottawa, they’d start off with something positive. “Really? That’s terrific! [BLANK] has a great music scene/arts community/natural setting/downtown core/sports facilities/fine dining/world-class what-have-you.” Some cities were praised for being affordable, some for being close-knit and friendly, others for being fast-paced and cosmopolitan. One city (London) was even heralded for the prettiness of its girls, a factor that did not sway my wife particularly, but did give me pause. (Not out of self-interest, you understand, but for my young son. I could imagine him at 17, looking around with tears welling in his eyes, saying “Thanks, Dad.”)

The people I talked to always started by praising their respective cities. I’d say, “Wow, sounds good.” Then it would come: the “Yes, but…”

“Yes, but come here in winter when it’s 40 below and you’ll see what it’s really like.” Or, “Sure it never really snows or gets very cold, but it rains all the time. It’s depressing.” Or, “Good luck finding a place to live! The downtown is so congested.” Or, “Yes, but the downtown dies at night.” Or maybe it was overrun with junkies. Or swarming with mosquitoes come summer. Or infested with government bureaucrats come fall. Or any number of ills. A litany of complaints would follow. This happened in every city I went to. Every city except one: Calgary.

“Calgary’s great! You should move here, you’d love it. It’s a great place to raise kids, too. It’s a young city, lots of exciting things happening here. The theatre, arts, outdoor sports. The mountains are, like, right there.”

I braced myself for the inevitable “Yes, but…”

None came. The sheer optimism of the place got me. It was refreshing, like a chinook sweeping in from the heights. My wife came out to see for herself, and she felt it too. It was settled; we chose Calgary.

That was back in 1999. Just before the boom went nuts.

I’ve never seen a city change as rapidly as Calgary has over the last nine years: the massive influx of people, the new shops, the office towers, the sprawl, the crowds, the constant pall of construction-site grit hanging in the air, the pirouette of cranes along the skyline. I used to say Calgary was a city of optimism. Now I tell people it’s the City of Dirty Tables, of Long Retail Lineups. A city where the simplest of home renovations becomes a year-long adventure. A city where you wander aisles looking for someone, anyone, who works there. Understaffed and overworked, Calgary is a city that can’t find people to bus its tables or keep its facilities clean. It’s a city of inflated prices and, how shall I put this, “aromatic” washrooms.

This must be a Golden Age for teenagers living at home, sponging off mom and dad. All the benefits of the boom, none of the hassles. I remember my own minimum-wage teenage years and I envy them. Imagine getting a $16-an-hour weekend gig without having to deal with the cost of housing or the other headaches newcomers to the city have to face. High school kids are flush with cash in Calgary, and the market is becoming skewed more and more toward the insufferably young. (Insufferable because they are so very young. Yes, I’m getting cranky in my dotage.) Memo to would-be entrepreneurs: this is an ideal time to launch businesses aimed at teenagers. Computer geegaws and music doodads, body-piercing emporiums, that sort of thing. That’s where the money is; trust me.

There’s something about hitting a million people, something about watching the odometer turn over on all those zeros, something about moving from the top tier of mid-sized cities to the bottom tier of large cities that changes a place irrevocably. Fortunately, Calgary is also a city of problem-solvers, and the massive migration has been absorbed remarkably well, all things considered. But it is also a city where the bottom line rules, where Penny Lane is gone, the Mount Royal Block has been erased and history is but a detail. Calgary: it’s not so much a city as an architectural Etch-a-Sketch.

I find it jarring. What must it be like for someone who was actually born here, who grew up here? A Calgarian, say, like our second son, who came into this world in a hospital with a window-view of the foothills and the snow-capped peaks beyond.

I worry—I worry about how I would react today if someone asked me, “We’re considering moving to Calgary. What do you think?” I worry about how I’d respond. Would I add a caveat as well? Would I say, “Sure, Calgary’s great, but…”

Will Ferguson’s books have been published in 26 languages. He has won the Leacock Medal for Humour and the Pierre Berton Award for Canadian History. His latest novel is Spanish Fly. 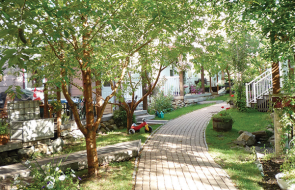 How long does it take someone in cohousing to walk 30 metres from their car to their front door on a Friday evening? Forty-five minutes and two beers or cups of tea, depending on which neighbours we run into on the way from the parkade, through the common house, to ...