The Hunt for Blue October

Conservatives and guns seem to go together. For instance: photographs of right-wing politicians holding combat weapons at gun shows (Derek Fildebrandt, Rob Anders) and blasting away at firing ranges (Kellie Leitch, Rona Ambrose). My favourite is a pic of Stephen Harper in the Arctic, firing a military rifle from the prone position. He looks just like a soldier—one who has tripped and fallen on top of his rifle and hurt himself.

In 2015 one of the last things Harper’s Conservatives did was pass Bill C-42, the Common Sense Firearms Licensing Act, which gave cabinet, not police, the authority to classify firearms. Stephen Blaney, Public Safety Minister, an expert in energy efficiency and water purification, praised the change by saying that none of us wants “unelected bureaucrats” making these decisions. Harper used his Bill C-42 powers to reverse the RCMP’s prohibition on two European combat rifles that look like something Rambo would fire one-handed while dropping into the jungle.

What Harper was doing with Bill C-42 was ensuring that guns would be an election issue in 2015 and that his party would own the pro-gun position. This forced Liberal leader Justin Trudeau to make counter-promises, including pledging to shift gun classification back out of government hands and into RCMP ones. He also said he would repopulate the Firearms Advisory Committee. Harper’s gun advisers were “experts” (manufacturers, hunters—people who enjoy guns, in other words). Trudeau promised to replace them with health experts and law enforcers. The difference was between people who think guns are fun and people who think they kill and maim. So the table was set, and whammo! The ungunned Liberals blew the Conservatives away.

If someone runs at me with the same gun I saw on the news, I’m not going to stop him and ask, “Say, mister, is that the automatic AR-15 or the semi-automatic?”

“Blast” ahead to the Conservative leadership contest of 2017. Forget for now who won and lost and why; let’s look at the candidates’ gun control positions. The Canadian Sports Shooting Association made sure we knew where each stood by interviewing them and putting the replies online.

All leadership candidates praised the law-abiding Canadian gun owner. Deepak Obhrai seemed to be washing his hands of the issue when he said he had no gun, just a camera. But then he praised former Conservative MP Garry Breitkreuz, who is perhaps best known for telling a school audience that all Canadians should be armed, especially girls. The other candidates gushed and fawned about growing up with guns. They had wonderful memories of coming of age in a bird blind or blowing apart small animals. Several called gun-owning “Canadian heritage.” Maxime Bernier went all in. He said when he is PM, “firearms owners won’t have to worry anymore.” But what about the rest of us?

Some of what the candidates said was in a language understood mainly by gun enthusiasts. They spoke of AR-15s,  magazine size, the trouble with classifying by appearance. All of this refers to assault weapons. The AR-15 was developed for the Vietnam War as a fully automatic rifle, meaning that when you hold down the trigger, the bullets keep flying until the magazine is empty. In the US, the AR-15 is called “America’s rifle.”

The AR-15 is also the weapon of choice for US mass murderers. Orlando night club, San Bernardino, Sandy Hook Elementary, Aurora Theatre—all of the victims of these massacres were killed with AR-15s or spinoffs of same.

Canada doesn’t prohibit the AR-15 but restricts it. If an AR-15 is semi-automatic (one bullet per trigger pull) with a five-round magazine, it can be registered in Canada in the restricted category. Many who desire unrestricted access to the AR-15 in Canada want it in its automatic (machine gun) form.

There’s also the fact the AR-15 semiautomatic looks the same as the automatic. Unlike Bernier and other Conservatives, I think appearance, in guns, does matter. If someone runs at me with the same (apparent) weapon as I saw on the news relating to a massacre of civilians, I’m not going to stop him and ask, “Say, mister, is that the automatic AR-15 or the semi-automatic?” I might have already dropped dead of fright.

Obviously the new Conservatives see the pro-gun stance as a vote getter. They still believe “there’s gold in them thar gun lovers.” But is there? The last federal election had 25.6 million registered voters, 17.5 million of whom voted. Meanwhile, two million guns are registered in Canada. Since gun-owning is a progressive hobby, like petting, and because of collectors (who may own a hundred), the number of guns might equate to something like 500,000 gun owners. Then you have to subtract the children. Twelve-year-olds in Canada can hold a registration for a firearm. I’m not kidding.

So, all I can say is the Conservatives should go for it. Go after those gun-toter voters, boys and girls. Slap leather! 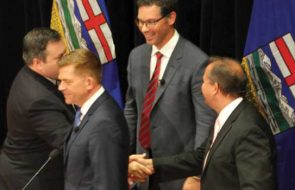 How Ethical is Alberta’s Governing Party?

We should have seen it coming. The first inkling that controversy would dog Jason Kenney’s victory in the 2017 United Conservative Party leadership race came not during that contest but a year earlier, when Kenney ran for the leadership of the Progressive Conservatives. On the evening of November 16, 2016, at ...

Inside the War Room

On the campaign trail in 2018, Jason Kenney promised that one of his first acts as premier would be to establish a “fully staffed, rapid response war room” to defend Alberta’s oil and gas sector. This was the cornerstone of his “Fight Back Strategy,” a massive shift in the tenor ...