Is Charity the Answer?

A temporary shelter does not a home make

“It feels good to give back to the community!” With this remark the chairman of the Calgary Foundation concluded the annual general meeting.

“But will good feelings be enough to maintain our community’s quality of life?” I asked myself. “Is charity sufficient?”

State-based charity originated in England at the time of the land enclosures. As agrarian practices changed, people were driven off the land that had provided their livelihood. Suffering was so widespread that Queen Elizabeth feared a violent uprising. The Act for the Relief of the Poor of 1601 empowered magistrates to levy poor rates on property owners with the money to be administered by nearby parishes. The purpose of charity was to avoid an insurrection.

Similarly, our current charitable system is a reactive approach to social issues. Our charitable social service and philanthropic systems have major flaws. Charity is cause-oriented and demographic specific, rather than dealing with root problems. Charity reacts to crisis rather than addressing prevention. Donors’ values and perceptions, rather than facts, determine the use of funds.

“I am willing to help someone who is trying to help themselves, but I am not interested in helping bums,” a board member of a foundation once told me. People who share this view believe that the individual is responsible for their misery or hardship. Philanthropists then become benefactors, and systemic socio-economic issues are ignored.

The effort of Calgary’s social service sector to address homelessness is a typically superficial charitable response. The 1992 City of Calgary Homeless Count identified 447 homeless individuals; the 2002 count identified 1,737. Homelessness was too visible to ignore. Funding was marshaled from the federal, provincial and municipal governments and community donors and foundations. In three years, over $90-mil- lion was distributed to social service agencies serving specific demographic groups such as seniors, aboriginals, abused women, youth, homeless singles, homeless families, the mentally ill and individuals with addictions. The “cause” was homelessness, the “people to help” were vulnerable groups, the “solution” was charity.

But charity is not the answer to systemic social problems.

Among the many donors was the CEO of a major Canadian rental real estate company. After making a large donation to a homeless organization, he said, “It feels good to give back to the community.” Yet his company has opposed attempts to increase affordable housing. Low vacancy rates and a lack of affordable housing contribute to the increase in homelessness in Calgary. This CEO has faith that the market will take care of the problem. So far the market seems to be concentrating on the profitable housing segments: downtown condominiums and single-family residences. Not until the market builds housing that the working poor can afford will this CEO’s faith in the market be justified.

A charitable approach leads to substantial investments which do little to improve the lives of the individuals that social services and donors seek to assist.

A charitable approach leads to substantial investments which do little to improve the lives of the individuals that social services and donors seek to assist. The Calgary Homeless Foundation’s Housing our Homeless Update estimates the need for affordable housing to be 14,415 units. Yet most of the $90-mil- lion was directed toward increasing emergency shelter space; less than 5 per cent was dedicated to the development of affordable housing over the long term. Our charitable solution completely overlooked the economic forces driving the growth of homelessness. Instead it provided shelter to the visibly home- less. This is no solution. All this does is hide the problem from public view.

The unintended consequence of a charitable approach to social issues is that we focus on addressing visible problems of demographic groups, for instance orphans, the elderly, youth or the homeless. This approach supports the fundraising mantra, “give to us so we can help others help themselves.” A poster child is easily identified this way and donors can develop affinity with a cause. However, this approach unconsciously ignores the well-being of the whole community and the opportunities available or lack thereof. As well, this approach does not consider that socio-economic problems arise out of economic activity or a lack of community opportunities.

Consider the work of World Vision. World Vision used to solicit donations to assist a particular child in a developing country. The donation appeal was individual and cause-oriented: “help little Roberto have a better life.” However, as World Vision gained experience they realized that assisting only the child had limited impact. Helping the child did nothing to overcome the problems the whole community experienced, for instance, the lack of a health clinic or school. World Vision came to appreciate that the well-being of the village was essential to the well-being of the child.

The amount of capital our charitable system handles has grown: $5-billion nationally in 2000 ($557- million in Alberta). Yet, funds are still distributed by donors’ affinity with certain causes, which do not necessarily reflect the community’s needs. Affinity with a cause does not equal an understanding of community needs or of root causes of social problems.

While giving according to affinity is not inherently wrong, it can have eccentric impacts. For example, Ruth Lilly—heiress to the Eli Lilly pharmaceutical for- tune—gave over $100-million to a U.S. poetry magazine in 2002. This kind of donation raises the question: should the government forgo tax revenue and allow philanthropists to determine what is a public benefit or what is in the public’s interest? Of course, there is nothing wrong with poetry, but would the public choose to invest $100-million in a poetry journal when there are millions of children going hungry in the u.s.?

Another problem with the charity model is that it deals with people in crisis. Addressing the needs of an individual or family in crisis is more costly to society and consumes substantially more donation capital than crisis prevention would. Some professionals estimate that 90 per cent of our social service efforts are directed at the 3 to 5 per cent of the population who are visibly high need. However, in low-income neighbourhoods at least another 25 per cent are extremely vulnerable to economic conditions, including increased costs of living, unemployment and high rents. When people in a low-income household spend more than 50 per cent of their income on rent, they are extremely vulnerable to homelessness; an unexpected expense such as car repairs can jeopardize their housing and employment. Yet, our social service efforts are for the most part avail- able to a household only once it reaches a crisis.

Social service organizations have failed to make an economic argument for investing in community well-being. Calgary Inc. (the name of Calgary’s economic development authority), in its “Economic Performance: Calgary’s Balanced Approach,” suggested that concentrated poverty is a growing concern. One-third of Calgarians spend over 30 per cent of their income on housing. A lack of affordable housing and increased poverty affect a city’s quality of life index, which in turn affects its competitive position in the global marketplace.

Social service organizations need to work with the business community to develop mutually invested environments. For instance, homelessness is perceived as an individual’s fault. However, the community of Fort McMurray also recognizes that a lack of afford- able housing affects individuals and small businesses alike. Small businesses in Fort McMurray must offer wages of more than $13 an hour in order to attract employees. In other words, the lack of affordable housing drives up wages for small businesses in Fort McMurray and creates a labour problem. A mutually invested environment among social services organizations, philanthropists and business would allow for non-profit housing development, to maintain a more productive workforce. 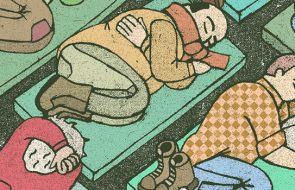 On October 18, 2006 with six dollars in my pocket and with no identification, I set out to document life in all the men’s homeless shelters in Alberta. Through December, during a winter of record lows, I hitchhiked to the six municipalities in Alberta that have shelters, lived in those ... 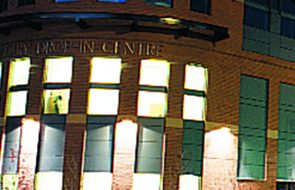 Is Charity the Answer?

“It feels good to give back to the community!” With this remark the chairman of the Calgary Foundation concluded the annual general meeting. “But will good feelings be enough to maintain our community’s quality of life?” I asked myself. “Is charity sufficient?” State-based charity originated in England at the time of the ...