Lorne Gibson was Alberta’s first Election Commissioner—an independent non-partisan officer of the Legislature, appointed in May 2018. Previously he served as Alberta’s Chief Electoral Officer from June 2006 to March 2009. It was a contentious term. Gibson pointed out serious flaws in the 2008 election, after which his contract was not renewed by the PC government that won the election. In the past 20 years Gibson has also worked as an election administrator and consultant across Canada and internationally. He is recognized by Canada’s Attorney General as an expert in election law enforcement. “I understand the election business,” says Gibson. “I understand the participants who are subject to the election laws. I understand the role of enforcement and how fair and just decisions are reached.”

AV: You’ve been Alberta’s Chief Electoral Officer and you’re now the Election Commissioner. What is the difference between the two roles?

Think of it this way: the Chief Electoral Officer runs elections and by-elections, and I enforce the election laws.

AV: Why do we need an election commissioner in Alberta?

This is an emerging role; it’s Alberta’s first election commissioner and only the third in Canada… Separating out the enforcement responsibilities from the Chief Electoral Officer’s office, which administers elections, was a forward thinking and prudent step that serves to strengthen and uphold basic tenets of natural justice—namely that nobody should be a judge in their own case and no one should be judged by their accuser. It is incompatible to expect the Chief Electoral Officer to be working with and assisting political parties and candidates with their compliance obligations while at the same time expecting them to be investigating compliance failures. The creation of this position as an independent officer of the Assembly creates a stronger perception of independence—it helps to build trust and confidence in the decisions the commissioner makes.

AV: When you were appointed, NDP MLA Brian Malkinson said a main part of your role is to “root out dark money in Alberta politics.” Would you agree?

There were a number of newspaper articles talking about the dark money in Alberta and how it was going to be my job to find it. Something you should know is this is primarily a complaints-driven process. I’m not out there on fishing expeditions looking for something to investigate. I respond to complaints that represent possible violations of the Election Act and the Election Finances Act. Would I expect to get complaints about contributions? Sure. This isn’t something I’m looking for, but I will respond if a complaint regarding contributions and spending by third parties comes to me.

AV: A lot of “dark money” spending could be online. If a citizen sees online political ads, how would they know if it’s something to complain about?

I would have to see the material the complainant was referring to. That’s what the process involves—people see something they are concerned about and they report it to our office. Recently we received a complaint from somebody who was contacted by a political party during the by-elections [in July] and they were concerned that the parties had information about them and were asking for their support. They didn’t think it was appropriate. Well, there is no prohibition against parties phoning voters and asking for their support. But as far as an election ad, it would be my job to try to find out who placed the ad and what it cost and where the money came from. It’s not an easy thing to do; [officials] are grappling with this south of the border and Elections Canada is dealing with the same kinds of issues. It’s not an easy task, but it’s important that somebody has a dedicated job to look into these matters.

AV: Should Albertans worry about our elections being corrupted?

I don’t think we’ve seen the same kind of activity that’s been reported south of the border. I have faith and confidence in our voters and our political system here in Canada. You can never say never, but I haven’t seen that we’re taking a sharp turn in that direction.

AV: After the 2008 election, when you were Chief Electoral Officer, you made 182 recommendations to improve the electoral process. Many were adopted by subsequent PC governments. How different is Alberta’s electoral landscape now, compared to the past?

It’s black and white. When I came to Alberta in 2006 to be the Chief Electoral Officer I took a look at the legislation I had to work with and, being familiar with legislation across the country, I certainly didn’t think Alberta’s was very progressive. I think I used the term “anti-democratic.” A number of provisions in the Act were outdated, some I considered to be ultra vires [ed: invalid]. I’m pleased to see most of the recommendations I made have been implemented. The current Chief Electoral Officer has also made numerous recommendations that the Legislative Assembly has adopted… I look at Alberta’s Election Act and its Finances Act and they are now as progressive as we’d see in any jurisdiction across the country.

AV: Your appointment wasn’t unanimous. UCP MLAs said it was “partisan” and that you have an “adversarial history with the Legislative Assembly here in Alberta.” How do you respond to that?

It certainly would have added to the perception of independence and trust in the work of the Election Commissioner if there had been a unanimous decision on the part of the selection committee. I think it would have shown that the parties represented in the Assembly, and the elected officials, stand behind the commissioner and support the role that I perform, and that they support the importance of playing by the rules the Legislature has established for running competitive and fair elections. That not being the case, I’m going to have to work probably even harder to earn and maintain the trust of the public and political stakeholders by exercising my powers and performing my duties in a fair, just and reasonable way.

AV: How do you ensure compliance with Alberta’s election laws?

I share a dual responsibility for ensuring compliance with the Chief Electoral Officer. Candidates and political parties, third parties, leadership contestants and nomination contestants are all required to report their activity, primarily financial activity, following an election or a leadership race. The Chief Electoral Officer and his staff have a responsibility to look at those reports, review them and ensure that these political entities are disclosing what they are required to disclose. A lot of the complaints I expect to get would be from the Chief Electoral Officer indicating to me that this party or this individual has not met their compliance obligations and it would be my job then to go out and investigate if it’s the case.

AV: What if somebody breaks the law?

No jurisdiction in the country has the comprehensive set of compliance tools that Alberta now has. One of the tools I have is to levy [fines, in lieu of going to court]. The powers conferred on the Election Commissioner to handle many infractions and administrative or quasi judicial matters should lead to better, fairer decision-making and reduce the costs in enforcement of Alberta’s election laws.

AV: How big a team do you have?

My team at this point is three people. I have one full-time investigator. I am retaining additional investigators for Calgary and Edmonton that will be used on an as-needed basis.

AV: A lot of political discussion and political advertising now happens online. How do you track that?

It’s a complaint-driven process. I know some jurisdictions do media monitoring. This is usually taken up by the Chief Electoral Officer and their staff, who employ companies to monitor social media, TV, radio, newspaper ads, that sort of thing. It’s quite time-consuming and expensive. As far as my role in all of this, I’m not in any way trying to duplicate what the Chief Electoral Officer does. My office is here to take complaints from the public or from other political entities.

AV: The upcoming Alberta election will be the first with a ban on union and corporate donations. How do you think that will affect the election?

Numerous jurisdictions across the country have placed restrictions on contributions. I think there is a perception that corporate and union contributions will try to find their way into the election through third parties, and that may be the case. But it is legal for unions and corporations to contribute to third parties. There are amount limits. We will have to see what influence it has. This isn’t new; it’s tried and tested across the country and we haven’t seen any radical difference in the way elections are fought.

AV: But if there is a complaint about political spending it goes to you?

Yes. People can go online to our website; there’s a complaint form. They can email us or call and let us know what they’re concerned about. If we find there is a possibility of an election law being broken, we’ll pursue an investigation. 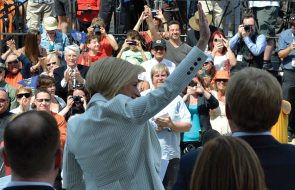 On May 24, 2015, some 10,000 Albertans made their way to the legislature. The wading pool was full of kids and grown-ups splashing around, there were frozen treats and food trucks, and Edmonton folk band 100 Mile House entertained the crowd. It was a festival atmosphere, but what was happening ...

I spent much of summer 2021 outside Alberta. Expecting the worst here—an imminent fourth wave of COVID—I took some time in Ontario for my mental well-being. The first question from one of my pollster colleagues out east when we got together for coffee: “What the hell is going on in Alberta? Is the ...

“Our Worst-Run Election Ever”

Someone told me: “We should have had UN observers monitoring Alberta’s last provincial election!” Alberta Liberal leader at the time, Kevin Taft, called it nothing less than “the worst-run election in our history.” At the time, I dismissed these comments as hyperbole, but I’ve come to recognize that the 2008 ...