I still recall that morning as if it were yesterday. I awoke, startled, the way you do when your instincts sense something unfamiliar in your midst. A shimmering, raspberry-coloured light—unlike anything I’d ever witnessed—was slowly creeping through the tall, narrow windows of my new Calgary apartment.

That was 15 years ago. I had just moved to Alberta from British Columbia to launch a new life in a new province. And truthfully, I was completely unprepared for the marvel that is southern Alberta light. “Visual opium” is how American writer Diane Ackerman (A Natural History of the Senses) once described this kind of phenomenon—when natural light and colour collide and tackle “our senses like a blow from a stun gun.”

I was stunned by the colours that roused me on that fateful morning. I say fateful because, ever since, I’ve spent my life on guard, searching for similar moments. Moments that only seem to come when I’m in this part of the world.

A long-time West Coast girl, I was more accustomed to the soft, comforting, less violent light that accompanies a humid climate. A Vancouver sunset, Canadian writer Max Wyman once told me, offers up the cityscape as if it is being viewed through “a glass of sweet, white wine.” Vancouver light is exquisitely subtle and soft—in stark contrast to that of my current home.

“Alberta light is harsh, electric and brittle with the potential to smash, explode and transform space.”

In Calgary, light, he believes, inhabits the “single, unique, intangible value” of this corner of Canada. “Despite the challenges of the climate, there is the sun. Never too much. But constant. And remarkable both as an internal resource and as an expression of place. This light is inspirational and heartening, particularly in winter when it’s at the peak of its clarity,” says the renowned architect, whose buildings, both commercial and residential, are constantly referenced in relation to Alberta’s indigenous light. 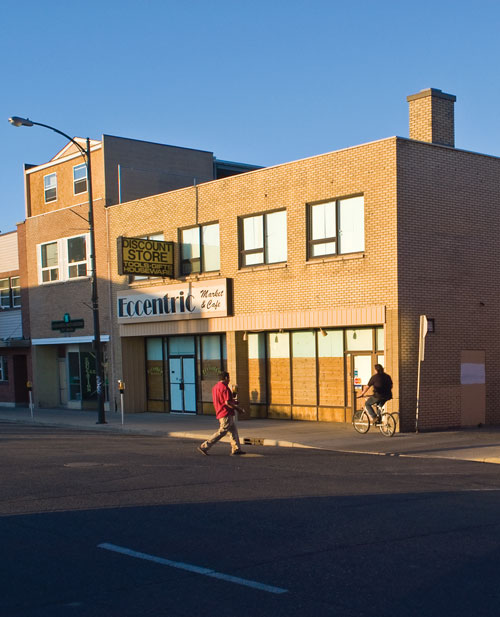 If local architects design with this kind of natural light in mind, Sturgess continues, they can transform winter into a celebration. “Crisp forms. Sharp curves. Hard lines. Bold and dramatic,” he asserts. “The light here is the lifeblood of sanity. When all else is challenging at best, the light gives us warmth and hope. Good architects get this and invent form that converses with the light. When I work in other parts of Canada, the rules are very different.”

Southern Alberta light—if you ask film industry advocate and third-generation rancher John Scott—is what initially made and continues to make this province Academy Award-worthy. “Remember the movie Days of Heaven—with Richard Gere and Sam Shepard?” asks Scott, who worked as a stunt man and head wrangler on the richly stylized 1978 film about turn-of-the-century migrant workers. “That picture won Alberta our first Academy Award,” he says. “It was for cinematography. Terrence Malick, the film’s director, switched his schedule around so most of the shooting was done during what we called the ‘magic hour.’” In his 1984 autobiography A Man with a Camera, Spanish cinematographer Nestor Almendros—the director of photography on Days of Heaven—wrote the following about filming during “magic hour” in Alberta:

“From the point of view of luminosity, this period lasts about 20 minutes, so calling it a ‘magic hour’ is an optimistic euphemism. The light was very beautiful, but we had little time to film scenes of long duration. All day we would work to get the actors and the camera ready; as soon as the sun set we had to shoot quickly, not losing a moment. For those few minutes, the light is truly magical, because no one knows where it is coming from. The sun is not to be seen, but the sky can be bright, and the blue of the atmosphere undergoes strange mutations.”

Almendros continued: “[Malick’s] intuition and daring probably made these scenes the most interesting ones visually in the film. And it takes daring to convince the Hollywood old guard that the shooting day should last only 20 minutes. Even though we took advantage of this short space of time with a kind of frenzy, we often had to finish the scene the next day at the same time. Because night would fall, inexorably.” 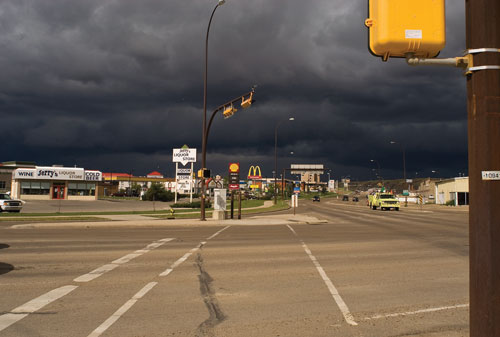 “What woke me up to the light here,” says a pensive Scott (who worked closely with the actors and directors of all of these films) “was when I had visitors from abroad and they’d go nuts over our sunrises and sunsets. It’s just the way light is in Alberta. Sometimes the mountains are pink. Sometimes they’re purple. And sometimes they’re gold.”

He recalls recently working on a film in Vancouver with his Alberta crew “and the guys I was working with got totally depressed.” Prolonged exposure to continuous cloud cover and rain, they concluded, was the likely cause. It follows, then, that Alberta’s dazzling blue winter skies were a welcome sight after Scott returned home from the West Coast shoot to his ranch, near Longview.

Phil Langill, a professor of astronomy and physics at the University of Calgary, claims that if there is one topic astronomers understand, it’s the topic of natural light. “Our lab is gazillions of miles away. The only thing we can study is light when it reaches Earth,” says Langill. “We have to understand how light is produced and how it interacts with matter. That understanding allows us to figure out what is happening in space far, far away.”

Do you see what I see? Some of us spend our lives searching for God. Me? I’m after the light.

Humidity, haze and pollution contain particles that scatter light before it hits the planet, he says, adding dryly: “Astronomers generally hate the atmosphere. I mean, it’s nice to have around if you like to breathe, but if you want to study the sky, it’s a pain.”

But southern Alberta’s dry climate has historically been ideal for his profession. “Incoming light can pass directly through the atmosphere, straight through to the ground—there’s less interference,” he says. “I’m no artist, but I see how this might create the crispness of light and the dramatic shadows we see here.” 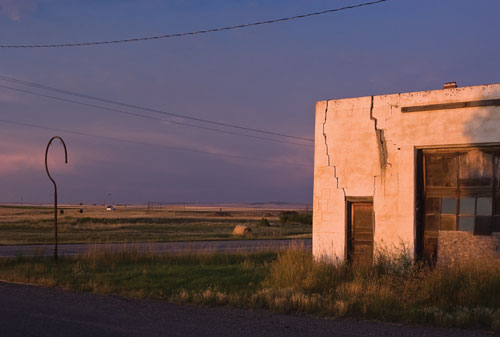 I recently paid a visit to the studio of prolific landscape painter Shirley Watson, who turned 80 this year and who has spent a lifetime observing Alberta skies. “I like to see way out there to the horizon. On a clear day in these parts, you can see forever,” says the Didsbury-born Watson over a glass of pink lemonade and ice. “That’s the way I’ve looked all my life. Way out there.”

Beside her, perched on an easel, stretches a long, framed canvas featuring a prairie scene. The sky is a rich and saturated, almost Mediterranean blue. Storybook clouds, boasting colours ranging from tangerine to cranberry, cast shadows on rich, green fields. Watson’s painting might look suspect—unbelievable verging on kitsch—if you’ve never experienced the marvel that is southern Alberta light. (The luminous colour and light employed by late American illustrator Maxfield Parrish comes to mind.) Meanwhile, I’m besotted. I know that in these parts—thanks to one fateful morning so many years ago—anything is possible.

I frequently drive with my husband and children from Calgary to the mountains. I’m often pointing out the window—distracting the kids from their video games and sounding, I’m sure, like a broken record. “Look!” I’ll announce over and over again. “Would you just look at that sky? Those mountains? These fields? Do you see what I see?” Some of us spend our lives searching for God. Me? I’m after the light.

Kim Gray’s previous collaboration with George Webber in AlbertaViews was “Life on the Colony,” Jan/Feb 2009. 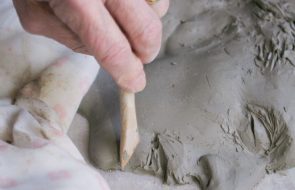