The Mystery of Ursus arctos

Searching for grizzlies in Alberta’s boreal

At the edge of a swampy opening in a remote region of the Peace Country, Lyle Fullerton is pleased to find what we’ve traversed the muskeg for: some golden hairs of Ursus arctos caught in a strand of barbed wire strung around a pine tree. The snag site—baited with a sticky, synthetic mixture to lure grizzlies—is just one of 200 that Fullerton, a biologist and special projects coordinator with the Government of Alberta, and his team have set up on a grid throughout the forested and farmland areas of the Chinchaga, an area known as Bear Management Area 1 (BMA1).

Of the seven grizzly bear management areas in the province, BMA1—at nearly 42,000 km2—is the second-largest. It’s the only high boreal grizzly habitat in Alberta, saturated by bogland and tight stands of mixed coniferous and deciduous forest. The Chinchaga is also the most remote grizzly habitat in the province, with few roads in much of the vast territory. Even so, for over 20 years Fullerton has been working in this tough landscape, studying and managing one of Alberta’s iconic species.

Using pliers, Fullerton carefully plucks a tuft of coarse hair and places the sample in a small envelope for safekeeping. “This is a grizzly bear’s version of Facebook,” he says playfully, explaining how bears rub their backs against trees, power poles and vertical structures to leave behind their scent as a message to other male and female bears in the area.

The behaviour is also a way for scientists such as Fullerton to learn about the bears: a single strand of the grizzly’s hair will be sent off to a laboratory for DNA analysis. By collecting samples from 200 different sites, Fullerton hopes to identify where grizzlies are appearing and reappearing on the landscape, with the overall goal of determining their population in BMA1. The ambitious research technique has never been attempted in the Chinchaga. Fullerton calls the study “groundbreaking.”

Across the province, grizzlies are considered a “threatened” species under Alberta’s Wildlife Act and Regulation. In 2010, when bear numbers were estimated to have fallen below 1,000, scientists and environmental groups lobbied for this designation and for government to take actions towards their recovery. (Alberta’s grizzly hunt had already been suspended, in 2006.) According to the most recent provincial Grizzly Bear Recovery Plan, from June 2016, only 700 grizzlies remain in Alberta. Recent research in southwestern Alberta by Andrea Morehouse of the University of Alberta found that 67 grizzlies live in BMA6, while another study by fRI Research concluded that grizzly numbers in the Banff and Jasper parks area, or BMA3, increased from 36 to 74 between 2004 and 2014.

Bears rub their backs against trees and power poles to leave behind their scent as a message—“a grizzly bear’s version of Facebook.”

While the province is currently attempting to rebuild grizzly bear populations, serious challenges remain in the Chinchaga, as biologists and policymakers lack a scientific baseline. And Fullerton says the rugged territory isn’t the only obstacle to conducting research in the Peace Country. “Some people have said the Chinchaga just isn’t a productive grizzly bear range. It’s thought to be too wet,” he explains. “It’s true there could possibly be a lower population density here compared to the mountains or foothills. But we just can’t say for sure.”

According to the biologist, one school of thought in the local scientific community is that the grizzly population in the Peace Country is a result of bears migrating from BC. Another theory is that many of the bears are originally from southwestern Alberta. Historically, the province used to relocate “problem bears” (those in persistent conflict with humans) to the remote Chinchaga, although that practice no longer occurs. But Fullerton suspects his research could prove these theories wrong.

“Over the years, we’ve heard about repeated sightings of sows (females) with cubs in this area,” says Fullerton. “One of our trail cameras recently caught footage of a grizzly sow with two cubs. When I noticed a third cub come out of the bushes, I was ecstatic. That’s a sign of a productive habitat.”

As part of the hair-snag project, Fullerton and his team have launched a “citizen science” tool—a smartphone app called GrizzTracker—to encourage local land users, including foresters, oil and gas workers, wildfire fighters and ranchers, to report sightings of grizzlies. The app allows citizens to pinpoint exact GPS locations, and, if safe, to take a photograph. Ideally GrizzTracker will provide Peace River biologists with additional information on grizzly bear distribution across the landscape.

Jim Witiw, a senior forester at Daishowa-Marubeni International Ltd., is participating directly in the grizzly bear initiative. DMI helps fund the research in the Chinchaga, and their staff carry the GrizzTracker app in the field to record sightings. Witiw hopes results from the study—a better understanding of how grizzly bears are using the landscape—will help inform best practices for forestry and natural resource extraction.

“There’s a different set of mortality risks for grizzly bears up here,” says Witiw, explaining how seismic lines, cutlines and other industry features in the Chinchaga increase opportunities for human–bear conflict. “The goal is to gain enough information to deliver a locally appropriate bear management plan to contribute to the province’s aspirations of recovery.”

Environmental groups, including the Canadian Parks and Wilderness Society, also support the research initiative in BMA1. Tara Russell, a conservation assistant with CPAWS’s Northern Alberta chapter, hopes the results force the government to address the negative impact of seismic lines on “keystone species”—animals whose removal drastically changes the habitat, such as grizzlies and woodland caribou in northwestern Alberta. “Grizzly bears are the canary in the coal mine,” says Russell. “They’re an indicator of our larger ecosystem. When we start losing top predators, it can have a huge detrimental effect down the trophic cascade.” Prey such as elk, for example, would benefit from the loss of grizzlies—but an elk boom could then lead to a decline in vegetation, including willows, whose shoots the ungulates eat. “It’s incredibly important that we protect grizzly bears,” says Russell.

Fullerton and his team plan to wrap up the hair-snag collection by the end of September. He looks forward to analyzing the results and more clearly understanding how many grizzlies live in the Chinchaga—though he knows his work is only just beginning. “For every stone we turn over, there’s another question about why and how grizzly bears live in this unique ecosystem,” says Fullerton as we retrace our steps back to the ATV we rode in on. The sun is drawing closer to the earth, casting shreds of golden light through the trees onto the spongy forest floor. Weather permitting, Fullerton will be back in the Chinchaga tomorrow, collecting hair samples and checking trail cameras at other snag sites.

Some groups, including the Alberta Fish and Game Association, hope counts such as these eventually justify a resumed hunt. “I think [research results] will start some pretty lively discussions in this province,” Fullerton says, smiling. “The end goal will always be the conservation of grizzly bears.”

Peace River’s Trina Moyles writes on social and environmental justice. Her Women Who Dig is forthcoming from U of R Press. 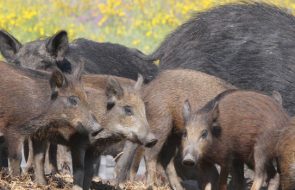 By the time Greg Gilbertson became a provincial fish and wildlife officer for the Alberta counties of Woodlands and Lac Ste. Anne in 1998, calls for help in dealing with wild boar were part of the job. Ever since Eurasian boar farms were approved in Alberta in the early 1980s, the wily ...

A few years ago Sykes Powderface and I visited a mouldering old cabin in Banff National Park. He told me a Chinese immigrant market gardener who once lived there used to trade vegetables to Sykes’s father in exchange for bighorn sheep meat. Some of that meat likely came from national park ...