Nine days out from the January 21, 2017, Women’s March on Washington, DC, Calgary had no local march scheduled. If it hadn’t been for Joni, this city wouldn’t have been part of the largest single-day protest in history, in which more than seven million people protested worldwide.

Wanting to get involved, Joni looked online and, finding no information about a Calgary version of the event, emailed the March On Washington executive asking to be connected with the Calgary rep. They replied: “You are the lead for the Calgary Women’s March. Your next countrywide conference call is later this afternoon.” Attached to the email were poster designs, policy documents and PDFs of resources. Joni sat there for a minute, staring. Then she got on the horn to a dozen connected, political Calgary women, including me: “Lookit, there’s only a week left before go-time, but we are going to rock this thing.”

What do you call an activist gathering in Calgary? If it’s “a shock,” we got one: 7,000 people came out.

Our tiny ad hoc committee met in person only three times: we divided up the work, pulled favours, arranged speakers, booked City Hall plaza, located sound equipment and megaphones, created a Facebook page, personally emailed everyone we knew… and rode a global wave of outrage all the way to one of the biggest protests in this city’s history. What do you call a gathering of activists in Calgary? If it’s “a shock,” we got one: more than 7,000 people came out to march. It was a mass of clever signs and costumes, kids on parents’ shoulders bouncing above a wide and buzzing crowd of laughing faces. Women and girls and grannies and others, all of us here to march together. It was glorious.

But with that first march we got “lucky.” The election of Donald Trump—professional narcissist and admitted sexual predator—was a shock even the most comfortable Calgarians couldn’t shrug away. Here, as elsewhere, the Women’s March became an opportunity to make known our disgust with… all of it. Decades of missing and murdered Indigenous women, 72 cents and less (still!) on the dollar, rape culture and the rise of racist nationalism, political rooms full of men (yet again) trying to legislate our uteruses… for these reasons and more, people showed up to chant and cheer under the Women’s March banner.

Our first-year “committee” was, really, an emergency response team. But to create a resilient and representative annual event, we needed to involve lots of great people: long-time feminists, artists, new Canadians, activists for specific issues (e.g., racism, homelessness, missing and murdered Indigenous women, trans visibility, domestic violence), women in the media, students… and ladies who just DGAF. Subsequent marches have seen the community take aspects of the event into its own hands.

A Women’s March is now an annual opportunity to roar back at the many forms of bullshit inherent in second-class citizenship. But kicking back at the darkness always earns you some haters. In 2018 many Canadian Women’s Marches, including Calgary’s, experienced a series of bot attacks within our Facebook page comments (yes, really). In 2019 a mirror page for the march run by TERFs (trans-exclusionary radical feminists) caused confusion and tension and heartache. Yellow vesters and others show up in small numbers to yell that women already have full equality, so we should just shut up and go home. You can’t fix stupid, or mean, or those who want to sow chaos for its own sake. So we drive around these pylons, and keep going.

Since 2017 the YYC Women’s March has gotten planning off the ground way earlier, started recruiting year-round, been listening to our critics, changing things up, trying to get smarter. Heading into this year’s planning, Joni called me in September. “Ready?” 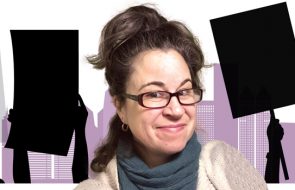 Nine days out from the January 21, 2017, Women’s March on Washington, DC, Calgary had no local march scheduled. If it hadn’t been for Joni, this city wouldn’t have been part of the largest single-day protest in history, in which more than seven million people protested worldwide. Wanting to get involved ... 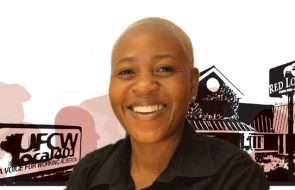 Unionization first came up at our west Edmonton Red Lobster at the end of January 2018. I was approached by co-workers and asked if I was interested in starting something. I quickly said yes—we needed to get something done at our restaurant, because it was pretty much falling apart. A ...