A resilient town faces a big transition from coal.

Uncertainty and adversity are common themes in the history of Hanna, a town 214 km northeast of Calgary in east-central Alberta. Over the last century, people in town and in the arid surrounding area have—as an official town history puts it—faced “drought, hail, blizzards, floods, rust, smut, poverty” and other challenges. Named for D.B. Hanna, a president of Great Northern Railway back in 1912, when the community was established, the town lost its rail line nearly a century later. Now the nearby Sheerness Generating Station and its coal mine are slated to close and some 200 high-paying local jobs could be gone.

In 2015, as part of the Climate Leadership Plan, the NDP government announced that all coal-fired power plants in Alberta would be shut down by 2030. “I guess we always knew the coal was going to run out, ” says Mayor Chris Warwick.  “But when the rubber hits the road you kind of go ‘Oh, whoops.’ ”

“A year ago I was really frustrated,” he says. “But since then we’ve been in great communication with Economic Development and Trade. The minister, Deron Bilous, came and met with us and he assured us this is just one of many meetings to come. That’s good to know.”

The community is now working on a transition plan; it’s in the “infancy stage,” says Warwick. Hanna’s future could include wind and solar energy projects, along with government funding for tourism initiatives and other industries moving into the area. “We’re hoping we’ll get real community buy-in,” says the mayor. “But it’s contentious. I’d guess the majority of residents in town would say ‘Why don’t you just fight the government on coal?’  But that’s not our position as a municipality—that’s a futile effort. Coal is going away for sure.”

The power plant may be reconfigured for natural gas, or it may not. “We’ll see,” says Warwick. “ATCO has assured us they’ll keep burning coal as long as they can, but 13 years isn’t a lot of time. If we can get the transition going, we might be better off at the end of this.” 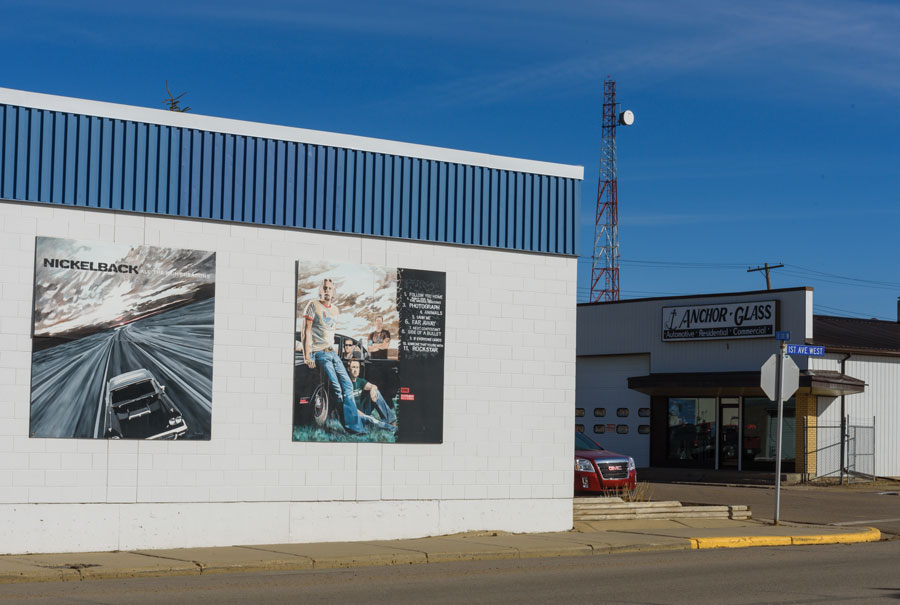 Downtown building with murals of rock band Nickelback. Formed in Hanna in 1995, the band has since sold 50 million albums.

What do you love about your community?
What most concerns you?
If it could be the way you wanted, what would your community look like?

Tanis Graham, Willow Creek Country Gift Store and Bistro: We knew the coal mine was going to close but we honestly didn’t think it was going to happen this quick; it kind of snuck up on us. My husband works for the mine, he’s been there 27 years—and what is a 50-year-old man supposed to do? We take good care of our own here. If someone gets sick we can raise money pretty fast. But we seem to be hit from every angle right now. I don’t know anybody that’s not going to be disrupted by this.

Ted Bond, retired: Put it this way: nobody is happy about the coal mine and power plant shutting down. But we don’t have the numbers to affect the politicians, we don’t have a voice.

Sandra Beaudoin, Hanna Roundhouse Society: You walk down the street and you know all the people. That’s a good and bad thing—when I first came here people knew more about me than I did about them and it was really unsettling. But people care about you.

Adam Ferguson, Henry Kroeger Regional Water Treatment Plant: The power plant shutting down has a lot of people worried there might not be much of a future here. In the past there’s been a lot of oil jobs, with crews coming in and a lot of money flowing through, but it would be nice to have more consistent jobs with people who would buy houses and stay in town.

Terry Hensel, Hanna Chrysler: I’ve been here 23 years. I’m probably still the new guy to lots of people. I love the camaraderie of people that come together to get things done here. Like every rural community, the decline of population is probably the biggest fear. But if we do some things right maybe we could stop that somewhat.

Connie Deadlock, The Emporium clothing store: The closing of the mine and losing half our population is our biggest concern. Hopefully something else will come in, but you never know—it’s the unknown that’s the scariest part. I think we’re headed toward becoming a seniors’ community. Seniors from the cities can get good value for their home and then come out here, that would be good—we’ve got the hospital, we’ve got the lodge, so the infrastructure’s here.

Cathy Watts, town councillor: There’s probably going to be loss of population. The school numbers will be down, and the use of our facilities will be down, and that has an effect. But we’ve been brainstorming. We always look at enhancing agriculture. We’re also very interested in tourism, ’cause why not Hanna? We’ve got an 18-hole golf course and a great museum—we’ve just simply got to change and get people to see us in a different light. We’ll do it: One moment you have fear and the next moment you have hope.

When you think of a city skyline, do you think summery expanses of prairie grasses, dotted with wildflowers and humming with birds and insects? Or maybe rooftop gardens lush with herbs and leafy greens? Terraces of green to rest your eyes on as you look up from your cubicle or ...