Some call it “the great upheaval.” It started back in November 2013, when the Province of Alberta signed an agreement with the Tsuut’ina Nation to build an extension of Calgary’s Stoney Trail—the southwest Calgary ring road—along the city’s western border. To make room for the road, the First Nation transferred 428 hectares to the province. In return it received 2,030 hectares of new land at the reserve’s western edge, along with a $275-million payment plus $65-million for relocating Tsuut’ina members displaced by the road. Today the province’s new land is abuzz with excavators, bulldozers and dump trucks, and the once-quiet border between Calgary and the Tsuut’ina Nation is being radically transformed.

“It’s a big construction site,” says Chief Lee Crowchild. “Some people are kind of shocked, saying, ‘I didn’t know we voted for this’ [in a 2013 band referendum]. But they did. The change from what was familiar to what it is now is 180 degrees.”

In traditional terms… we’ve had a camp chief for a lot of years and now it’s time for a war chief to come in.” Chief Lee Crowchild

Chief Crowchild—who defeated the incumbent chief, Roy Whitney, in a band election in November 2016—is the third Crowchild to be chief, following his father, Gordon Crowchild (chief from 1970 to 1976) and his grandfather, David Crowchild (chief from 1946 to 1953), after whom Calgary’s Crowchild Trail is named. The new chief inherits big plans for development on the reserve lands adjacent to the ring road. Tsuut’ina Nation built the Grey Eagle Casino in 2007, with an expansion in 2012. Near the casino, in partnership with developer Canderel, Tsuut’ina plans to build an “entertainment corridor” with new hotels and “family-fun activities.” A second development zone, also linked to the ring road, will feature outlet malls and big-box stores near a twin arena and a new Tsuut’ina culture museum. A third area is set aside for “professional development opportunities” including medical and dental buildings.

As Chief Crowchild sees it, facilitating this development is just part of his role. “Our core values,” he says, “our core principles are to be the stewards of the land, of the water and of the air. That’s what we need to be responsible to, that’s what our ancestors and our relatives that are long gone have passed on to us.”

This commitment to stewardship is perhaps clearest in the chief’s opposition to the Springbank dry dam—promoted by the City of Calgary and the provincial government as an Elbow River flood mitigation effort at the southern edge of the reserve, upstream from Calgary. “We haven’t given our consent,” says Chief Crowchild. “We have to give our consent. I think they assumed they don’t need to consult with Tsuut’ina because it’s not really affecting us. But in reality it affects us in major ways.”

“The nation is going through change,” he says. “In traditional terms, within the encampment you had what you call the camp chief and the war chief. I think we’ve had a camp chief for a lot of years and now it’s time for a war chief to come in. That’s what I’ve been told by the old people. It just means to talk the truth.”

“We’re in interesting times,” he adds. “I come to work every day and say ‘alright, what are we going to do today?’ ” 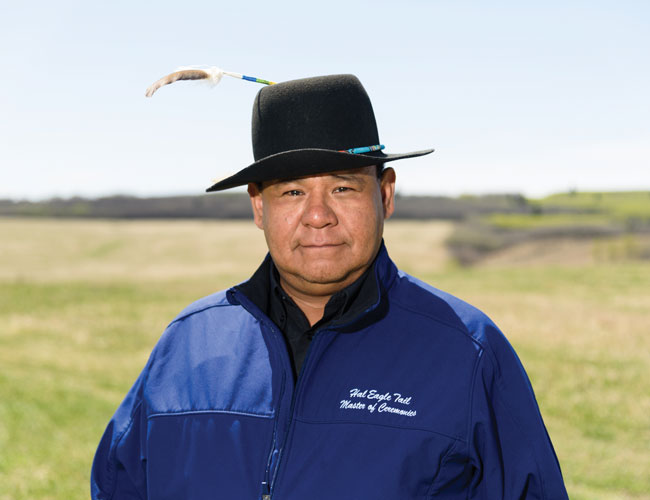 Hal Eagletail is an in-demand powwow MC and a Tsuut’ina cultural leader who often speaks to community groups in Calgary.

Hal Eagletail, powwow MC: Chief Bullhead signed an agreement in 1908 with the Department of National Defence to lease our land as a training facility to prepare soldiers to go to war. That first lease gave us modern roads and power lines. The military used that land right up until 1997. I grew up listening to the bombs and the machine gun fire. They used to tell us—a memo went out in the community—when you hear the night-ops and the helicopters going over, don’t put on your microwaves. They shouldn’t have sent that memo—every time those helicopters were operating we’d all go turn on our microwaves to see if we could mess up their operations.

But we grew up hearing and seeing all the damage they did to the land. Prime Minister Chrétien decided to move CFB Calgary up to Edmonton in 1997. Our land was in such horrible shape—unexploded bombs, shrapnel all over the place—so the Canadian government sent a whole lineup of soldiers with metal detectors, and they said “OK, your land’s clean.” Our chief at the time, Roy Whitney, said “Let’s clean up our own land. Let’s educate our people so we can identify bombs, and dismantle them or blow them up.” We created our own company, Wolf’s Flat Ordnance Disposal, which is one of 12 companies on earth that can go into war-torn areas and clean up the spent ammunition, shrapnel and whatnot. We bought locators that can find metal six metres underground, as opposed to 18 inches. But because of the negotiations at the time the government would only pay for cleaning up the first two feet. That land is going to be contaminated for hundreds of years. So we’re in court over their mess.

In 2013 a flood exposed a huge tank shell. The city sent in their own bomb squad, which is fine. But they should have sent in our company. We missed a good opportunity to work together, the city and the Nation. With our new land development zone, these are the relationships we need to build on.

My partner Dave often laughs with anticipation in our kitchen as he unpacks grass-fed short ribs and pastured chickens from the grocery cooler and reassures me that my culinary values trump his budgetary ones. But Dave and I are not the norm. For many North Americans, food is a stress-inducing, hot-button ...