In 2008 the Beaver Lake Cree’s chief councillor, Alphonse Lameman, filed a court action against the governments of Canada and Alberta, alleging that the cumulative effects of industrial development were infringing on his people’s right to hunt and fish. “The animals are starting to deplete,” he told reporters on the day he launched his case. The lawsuit encompasses 321 “projects” with over 19,000 individual “developments”—everything from wellheads and pipelines to the Cold Lake air weapons range—but no single company is being sued. Instead, Lameman asked the court to hold the Crown responsible for industry’s collective environmental impact.

The resulting litigation’s complexity is overwhelming in many ways (that was in fact one of the grounds on which Canada and Alberta sought to have the case dismissed), but the outcome is likely to hinge on proving Lameman’s six simple words true. Are the animals starting to deplete? And if so, is that a consequence of oil and gas development? If the Beaver Lake Cree can establish those two facts, then, according to our constitution, they will be owed much more than damages; they will be owed a brake on new development in the oil sands.

The First Nation’s right to hunt and fish is spelled out in Treaty Six, which the Beaver Lake Cree signed in 1876. Treaties, of course, are the subject of no small acrimony. Translations were poor, and in some cases crucial terms such as the actual size of a square mile went unexplained. By signing Treaty Six, the Cree agreed to “cede, release, surrender and yield up to the Government of the Dominion of Canada” their ancestral territory (roughly 40,000 km2 spanning present-day northeastern Alberta and a sliver of northwestern Saskatchewan); in exchange, the government promised that “they, the said Indians, shall have the right to pursue their avocations of hunting and fishing throughout the tract surrendered… saving and excepting such tracts as may from time to time be required or taken up for settlement, mining, lumbering or other purposes by Her said Government…”.

To read the entire article, from the June 2014 issue, click here.

The Beaver Lake Cree Nation’s current chief, Germaine Anderson, says, “We have to keep going. We will not stop.” That resolve will be needed, as their day in court is still years away. The BLCN’s legal team is amassing evidence. Money remains a major obstacle—the Beaver Lake Cree, whose on-reserve population is less than 500, relies heavily on contributions to cover its legal fees. RAVEN trust has raised $250,000 for this fight since 2014; their goal is another $1.5-million before this case reaches trial.

Of course, the Beaver Lake Cree aren’t the only ones with a new government. The leaders of Alberta and Canada now give every indication of believing in ecological stewardship and Indigenous rights. Among Rachel Notley’s earliest moves was the creation of a 100-megatonne cap on oil sands emissions, a carbon tax and an Oilsands Climate Advisory Panel whose members include prominent Aboriginal and environmental activists as well as senior executives from the oil industry. Justin Trudeau has given Canada its first Indigenous justice minister, made climate change a policy priority and imposed a moratorium on oil tanker traffic along BC’s northern coast, killing the Northern Gateway Pipeline.

But both leaders inherited an economy that relies on oil and gas. Both remain committed to developing the oil sands “responsibly.” And neither of their governments has reached out directly to the Beaver Lake Cree Nation.

The biggest change comes not from government or the courts but from cold economics: The price of oil and natural gas is roughly half what it was in mid-2014. Oil sands expansion in Treaty Six territory has, with few exceptions, ground to a halt.

For some of Alberta’s iconic species to survive, however, industry will have to do more than stop expanding. It will have to retreat. The caribou in Treaty Six territory, for instance, continue their steady march to extirpation.

In the meantime the Beaver Lake Cree are trying to take fate in their own hands. Since that winter day when Crystal Lameman drove me through her reservation, an ambitious food and energy sovereignty program has been started, with 84 apple trees and 14 cherry trees planted and a 24.65 kW solar farm placed atop Beaver Lake’s Amisk community school.

“We’re here and we’re exercising self determination,” says Lameman, who is now the band’s Treaty coordinator. “We’re shaping the economic and political ideologies of and for our children to be in line with sovereignty and traditional land use.”

Arno Kopecky is an environmental journalist. 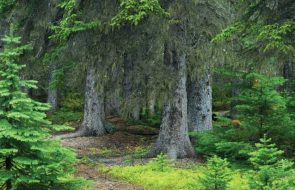 I ’ve seen the transformation of the country in my lifetime,” says biologist Lorne Fitch as we drive up gravel Highway 517 to Hidden Creek. “Alberta’s Forest Service has failed to recognize that there are more values to these landscapes than fibre. A lot of policy is driven by mill ...