The creation of the Alberta Party

Where did the chaos of January 2011 leave the Alberta Party? The only provincial party left standing that hadn’t alienated itself from Alberta’s vast swath of disaffected voters through obvious extremism (Wildrose), heedless incompetence (Tories), irremediable ineffectiveness (Liberals) or plain old irrelevance (NDP)? Sure, no one really quite knew, then or now, precisely what the Alberta Party was. But in the days and weeks that followed January’s political upheaval what the party seemed to have going for it most was everything it’s not.

Hey, you’ve got to start somewhere.

The serious work of forming the new version of the Alberta Party, which until a couple of years ago had been a vaguely right-of-centre fringe party, began in 2009 when the Renew Alberta movement announced it was going to create a new centrist political party. Renew Alberta was essentially a group of activists whose only common affiliation was a commitment to political change. It was co-chaired by Chima Nkemdirim, the organizer and social-media guru behind Liberal MLA Kent Hehr’s 2008 and Calgary Mayor Naheed Nenshi’s 2010 victories. Nkemdirim is now on the Alberta Party board.

In essence, a whole bunch of people upset and frustrated with Alberta politics got together and decided to use an existing party, the Alberta Party, as their vehicle of change. It needed a new engine and a steering wheel, but a brand new car was too expensive and so the group settled for the used one with the great hood ornament: the perfect name.

To read the entire article, from the May 2011 issue, click here.

Ahead of the 2012 election, the Alberta Party had just renewed itself under the banner of centrist pragmatism. The people behind it all saw Albertans were tiring of a PC party rooted in cronyism, that the Liberals were a zombie brand, and that Brian Mason was honourable but not Premier-material. The rationale for renewal was sound. The province was ready for change. Which is precisely what happened. Alison Redford imploded. Danielle Smith imploded. Jim Prentice failed to resonate. Mason was put on ice. The stage was set for one of the generational shifts Alberta politics is famous for.

But the Alberta Party didn’t step into the void, mostly because they didn’t plan for Rachel Notley, whose poise and intellect offered young, urban Albertans the alternative they were looking for in the 2015 election. The party did elect its first MLA in leader Greg Clark, who proved to be an astute but dry politician. He remains an MLA but resigned as leader in November 2017 to allow the party to “re-galvanize” itself, he said. In other words, he was pushed out by party forces wanting someone more dynamic to take on Notley and Jason Kenney as things gear up for a 2019 election.

Which means the Alberta Party finds itself roughly where it was eight years ago—trying to make moderate politics relevant. Ironically they’re going about it in the same way. In 2010 the dialogue was powered by Renew Alberta, whereas today a grassroots movement called Alberta Together is informally working with the party to carve out an identity voters can grasp and trust. At the June 2017 Alberta Together conference, the talk was about creating a centrist party for voters who care about fiscal prudence married to social inclusiveness. In other words, nicer than the PCs and savvier than the NDP.

As in 2010, this merry band of middlers believe they have the wind in their sails. On the left, the NDP seem to have angered everybody. On the right, the Wildrose were extreme and the PCs corrupt—which means the UCP could be extremely corrupt. All of which means the Alberta Party is still a strong idea on paper, and maybe not just on paper. Calgary MLA and former NDPer Karen McPherson crossed the floor to join the Alberta Party just before Clark resigned. The party’s path to power, however, is far from straightforward. Some will view the Alberta Party as too much of a compromise; others will see a credible alternative to the binary system we see corroding US politics. 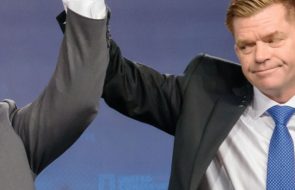 At 5:20 p.m. on October 28, 2017, minutes before the accidental, and then the official announcement of the winner of the United Conservative Party’s (UCP) first-ever leadership race, blue and white balloons hung in a net above a brightly lit stage at the BMO Centre at the Calgary Stampede grounds ...

The Alberta Liberals have a new leader. Calgary lawyer David Khan won the 2017 race against Calgary lawyer Kerry Cundal with 55 per cent of the 1,661 votes cast. A cogent issue divided the two. Cundal was open to discussing a merger or other strategic deal with moderate progressives before ...

Why I Left Politics

For three and a half years (2004–2008), I had the honour of being the Alberta Liberal Member of the Legislative Assembly for Edmonton-Meadowlark. The pay was pleasant, the perks were plentiful. I was treated with a degree of respect which is still afforded to elected representatives. I travelled around Alberta ...