On the day her mother cancelled chemo and deter-minedly pinned a new election map to the raised rose wallpaper of their dining room, Constance slammed her chair into the sideboard and took her cold cereal supper to bed. Ever since Constance was five, Hope Wilson’s name had appeared on every possible municipal and provincial election ballot. While Constance had yet to vote, she’d worked every election, and, before this one, they had all started the same way: She skipped school, they ate a celebratory breakfast at Cora’s, then bought a new clipboard and red, yellow and green pens. Over the years, Constance lost many of these pens trying to keep up with Hope, whose goal each election—besides winning—was to knock on every front door in the constituency area twice. They followed the path outlined on the map. If no one answered they left a flyer picture-side out, a waving flag in the mailbox of those too scared, apathetic or busy to greet them.

Every election, her mother door-knocked like someone with an overseas flight and missing passport. Only when Constance’s pace slowed to a crawl would she stop. Kneeling down she’d say to the daughter, “Your job is the most important, honey. Now we need to get to that next house so we can colour it on the map. What do you think? Will it be red, yellow or green?” Predictably, Constance rallied to her duty, recording whatever the voters said:

Get the fuck off my property.

Ditch the kid and come in to talk politics privately.

She didn’t record anything the time a naked man opened the door because he didn’t speak. Nor did she record the smells released at open screens: skunky oils she could describe but only later identify, incense, frying hamburger and lemon cleaner.

The number of outright haters (red) were dwarfed by the number of unopened doors and people who accepted the flyer while shaking their heads unreliably “yes/no” when asked if Hope could depend on their vote (yellow). Only some bothered to ask questions and they were usually setting traps. Their inquiries, delivered without curiosity, were predictably followed by soliloquies of ranting dogma, which recorder Constance scrambled to write down in the margins. In these instances, Constance was to whine so Hope could excuse herself. Constance never liked this acting part.

Colouring the map was her true motivator over the years of failed campaigns. On returning to their campaign headquarters, where piles of voter contact forms, newspapers, dirty dishes and flyers stretched from the dining room into their small kitchen, Constance carefully transferred her clipboard information onto the map that flattened houses into rectangles, curbs into straight lines, street signs into stretching numbers. She coloured each rectangle with the temperature of the people inside. Red for hate, yellow for apathy and—her favourite—green for support.

Her mother’s hair had only begun to grow back when she returned to the campaign trail without Constance. Anyone who opened their door to Hope was plied with a printed Working for You flyer from which beamed her pre-cancer headshot. Those voters who compared this photo to the woman on their porch would have noted the thick curls were gone, her cheeks were puffier, but her eyes were the same. Alert, never fully focused as though looking ahead to the next item on her list.

On this final campaign Constance knocked on doors with her mother sporadically, and when she did she stalked through front gates muttering that they were closed to keep people like Hope out. She aggressively rattled fences to trigger territorial dogs. She complained in a voice too young for her newly adult frame. One night as the wind blew leaves and their flyers into bushes, she yelled at Hope’s fleeing back, “Asking someone how they’ll vote is like asking about their sex life. It’s rude.”

“What do you know about a sex life?” Hope stopped.

“Nothing,” Constance looked down.

“If you need to know more, you know I’m always here to talk,” and Hope moved on. “Now keep up.”

That evening as they coloured the map Constance tried again, sweeping her arm around the disordered dining room, “What’s the point of this?”

“You know the point. We want school lunch programs and equitable women’s healthcare,” Hope said. “I just wish you could support me, though I know you’re biologically designed to be oppositional at your age.”

But it wasn’t true. Though she was eighteen, Constance was not oppositional for her age. Later that night as she lay staring at the spackle ceiling glinting light from the elm-filtered streetlights, she realized the question was not What’s the point, but Why are you spending the last days of your life running from me? The words clawed at the insides of her throat and burrowed deep into her lungs until she couldn’t breathe; her fear took the shape of her own death.

The truth was that Constance anticipated elections like Christmas vacation. Hope’s job as a realtor was put on ice—she did not make one house sale or schedule any late-night showings. School was effectively cancelled for Constance. And then there were the modest but real results. As they worked together every election, Hope’s portion of the popular vote grew. The series of past election maps, which in non-election years slumped in the pantry, showed Hope’s success: from a splattering of green, like the marks of faint mud spray, to solidly patterned camouflage, where green filled whole neighbourhoods. One of these years, Hope might win.

This year, however, Constance knew her mom’s future ended at the next block, not the distant horizon. Yet Hope denied what the doctor with his long face and searching eyes said in his fluorescent-lit office the year before: “You have two years, Hope, if we throw everything we can at it. With a full complement of surgery, chemo, radiation, two might even stretch to four.”

Three months before, on the drive home from that same office with the same doctor, his words had hung in the air scented with fake pine: The cancer is growing, Hope. Your treatment frequency has to increase. As the wipers frantically shed water in pace with Constance’s pumping heart, Hope spoke over the doctor’s haunting.

“I can’t do it anymore. In fact, I don’t think I need it anymore,” her mother said, pulling into the parking lot of a closed café. “I’ve been reading on the internet and there is so much Western medicine doesn’t know. I just need your healing thoughts. Our belief in my body’s power to heal itself will ensure its recovery. I can feel it in my bones. It’s like the campaigns, honey, we can do the impossible together.”

Her mom lived this way best: the future as full of possibility. For Constance this belief that optimism could inexplicably win the day, that it could make right what had become so wrong on a cellular level, it defied logic. Constance reasoned to herself that if her thoughts—just her thoughts—could heal her mother, then surely Hope would never die. But logic and reason, however bravely engaged, have little power over a daughter’s desire to please her mother. By day she tried to believe Hope’s body could heal itself with the right amount of meditation and pH-correcting tonics, but every night as she lay looking at the glittering sky of her bedroom, Constance knew she had failed again. By her mother’s same logic, could her thoughts kill as well as heal? If so, Constance worried that with all of her mind’s unintended catastrophizing casting herself a sorrowful daughter alone in the world, Hope might die very soon. At this, guilt joined her sorrow and they lay companionably together like weighted blankets on her chest. In these moments where she had failed already, Constance mourned the Hope sick from chemo. The one who was around to notice when Constance left the house without a toque. Who called out when Constance’s microwave dinner pinged. Who sat with her on the worn couch where she’d spent so many evenings alone as her mother closed a deal.

Who asked, “What are you studying for?”

Who asked the next day, “How was the test?”

Who, after asking questions, waited patiently for answers.

Constance was ashamed to say there was something wonderful about the sick Hope. With cancer, like elections, Hope had needed her to be other than purely independent. Constance’s arms grew stronger from juicing every day. She rolled her mother medicine when nausea flattened her.

After Hope refused treatment she felt better. She tasted food again, she belly-laughed, she stayed awake to the end of the movie that left them buried in crumpled tissues pulled from a shared box. Her eyes saw the small pleasures. Then the goddamned map distracted her. It lit the way to a future that would not be and which only she could see. Constance wanted to rip it from the wall so the pins flew, crumple it like a fast food hamburger wrapper, then burn it as though clothing stained with the blood of another. It had stolen something irretrievable from her.

But instead of this violence, on election day Constance did her job. She tidied the stacks of pamphlets, finished colouring in the last of the houses. Stepping back alone in the room, Constance acknowledged that this time the green stretched further than it ever had before. Growing voter support. None of those people knew what their short porch interaction with the cheery lady in the wig had taken from her.

Hope entered the living room smelling of lavender oil and wearing the boots she called her lucky lady leathers. “Ready?”

Constance shrugged, then pulled on her windbreaker, slipping the green pen into its deep mesh pocket. Their voting station was a short walk south, and as they waited in line Hope greeted her fans as Constance fixed her gaze on the buttons decorating many of these people’s fall coats, “Vote Hope to the Rescue.” She fiddled with her photo ID, fussed with her collar. When it came time to step into the voting booth for the first time in Constance’s life, her mother whispered, “Thank you, love. This will be your win too.”

Stepping behind the cardboard folds of the privacy screen, Constance unfolded the ballot and there it was:

Constance’s fingertips flattened the edges of the paper then gently polished her mother’s name. She could not pocket this souvenir. It was against the law. So disregarding the compulsory HB pencil, inside the lines of Hope’s box designed for a simple X, Constance spoiled her ballot. As she folded the thin paper, a brightly coloured green box disappeared. 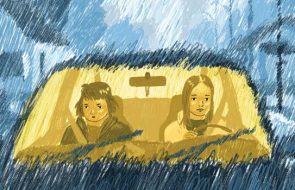 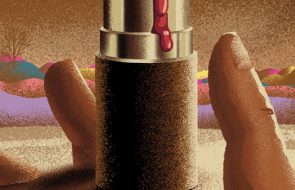 Three seniors today: Jennifer Chen, Megan Levitt and Shelby Roe. I hear Jennifer before she rounds the corner. “And then he sent me this!” Megan squeals. Shelby quips, “Is it supposed to be that red?” They turn the corner in matching outfits, athletic leggings and coordinated sweaters: pink, teal, yellow. Jennifer shoves ...

AV: What was the inspiration for your story? The inspiration for this story was a cottage and dock that I used every summer when I was  kid.  I wanted to explore the thoughts that kids have when they face something for the first time — whatever it may be. AV: Had you ...