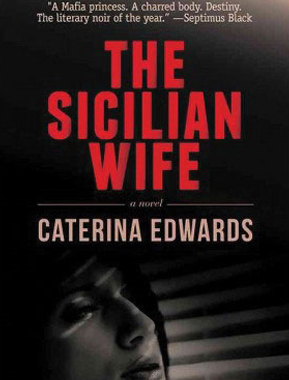 Edmonton writer Caterina Edwards’s latest book is both an intriguing mystery and a sharp critique of how men often expect women to behave. As a mystery, The Sicilian Wife is a departure from Edwards’s previous work—the award-winning memoir, Finding Rosa, as well as a novel, short stories and a play—but thematically the exploration of the lives of Italian-Canadians, and the setting in Alberta and Italy, are both familiar from her previous work.

The novel begins in Sicily in 1962. The protagonist, Fulvia Arcuri, is born into a mafia clan and is expected to uphold her father’s honour through obedience and propriety. She refuses, and over the years launches multiple escape attempts, finally starting a new life in Edmonton. A second storyline, set in 1989 and told in alternating chapters, follows Marisa De Luca as the newly appointed and much disrespected commissario of the police station in Fulvia’s hometown. When Fulvia’s estranged husband is murdered, Marisa is determined to exact justice. She enlists the help of Sergeant John Buonaiuto of the Edmonton police and the investigation unfolds in both locations.

Edwards’s prose is evocative if occasionally slow-paced. Fulvia loves Sicilian folktales and these stories inspire both her actions and her descriptions. For example, the man sent to retrieve Fulvia from Rome—in one of many failed escapes—is described as the “Frog King,” with “breath… of sharp mint and wet earth, swamp.” Sicily is lush and wild in contrast to Edmonton, the Canadian food “blander, easier to swallow, more innocent in its anonymity than the meals at Bagna Serena.” Yet Sicily—where the mafia permeates much of life—is also harsh, “hot and gritty” like the sand blown over from the Sahara.

Secondary characters are also finely drawn. Marisa’s initial perception of John is that he is “weightless; he had seemed more real when he was only a voice on the phone.” But this weightlessness makes him easy to deal with, and Marisa—and the reader—soon realize John has his own difficulties, complete with a soon-to-be-ex wife. In Sicily a narrative thread involving Alex, Fulvia’s ex-boyfriend and Marisa’s short-lived love interest, reveals complex, tense relationships between the sexes.

As a professional indexer and proofreader, I appreciate the quality of the cover design, layout and prose, but the book has a large number of typographical and punctuation errors, particularly missing periods. The story deserves better. Still, I look forward to Edwards’s next book, and will be revisiting this one for a gripping and intimate narrative.

—Stephen Ullstrom is an indexer and writer in Edmonton. #

The Environmentalist’s Dilemma: Promise and Peril in an Age of Climate Crisis

Unpredictable yet increasingly consistent, smoke season dominates our conversation whenever it arrives. It’s novel, and ominous, and fleeting, the perfect conversational kindling. Imagine, we say, we’re breathing in what used to be a forest, animals included. Or simply, What a sunset. So Arno Kopecky writes off the top of The Environmentalist’s ...