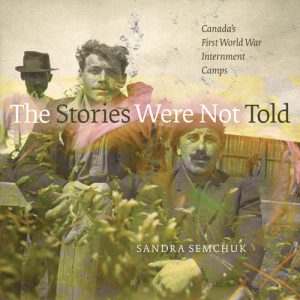 Why wouldn’t he talk about it?” Donna Korchinski wonders. “Of course he’s not going to talk about it, because he was ashamed.” She’s speaking of the internment of her Ukrainian step-grandfather at the “enemy alien” camp at the Cave and Basin in Banff, at the outbreak of the First World War. This story is one of 20 or so testimonials in Sandra Semchuk’s remarkable new book, The Stories Were Not Told. It’s a testament to a stain on Canada’s history.

Semchuk, whose great-grandparents emigrated from Galicia in 1912, is a 2018 winner of a Governor General’s Award in Visual and Media Arts. Here she’s assembled interviews, transcripts, essays and photographs to present what happened to “foreigners”—mostly of eastern European descent—with the 1914 introduction of Canada’s War Measures Act, which enabled arrest and detention without charge or trial.

The grim irony is that those interned, mostly males—Ukrainians, Poles, Germans, Jews, Armenians and other nationalities—had fled hardship in their homelands to come, drawn by government propaganda, to “open” Canada’s lands and find a better life. Not subversives or soldiers, they were innocent civilians who were rounded up, judged by name, appearance, or for lack of official papers, and shipped by boxcar and other means to one of the 26 camps, located in seven provinces, housing thousands of internees, adults and children. Alberta was home to four internment camps—two near Banff, and others in Lethbridge and Jasper.

The beautifully designed book includes a foreword by Jen Budney, herself of Ukrainian descent, along with a long contemplation by Semchuk. Adding verity and texture are 154 photographs. Black and white historic photos reveal young males, the camps’ inhabitants, still vital and oh so human, their faces retaining what dignity they could; we also see the camps’ children and women, and the rough shacks and barracks often built by the internees themselves. The full colour contemporary photographs are Semchuk’s, taken when she visited former camp sites in places such as Castle Mountain, or a Brandon, Manitoba, Safeway parking lot covering a “hole” which confined that camp’s resistant prisoners.

The book also touches briefly on the internment of Japanese-Canadians in the Second World War, as well as the fracturing of Indigenous families in residential schools. The negative impacts continue to reverberate today. To dwell in this book’s pages is to experience dismay, sadness and sobering revelation. Finally though, a century later, internment stories are being told, making our nation’s history more authentic.

The epigraph to Rough, from The Hobbit—“There is nothing like looking, if you want to find something. You certainly usually find something, but it is not always quite the something you were after.”—could not be more fitting. Rough is not only about living “rough,” homeless on the streets, but also ...