Craig trails behind Jim and Penny as they enter Denny’s. Coming here was Jim’s idea. Penny wanted to stay in bed like always, but Jim made her get up and drag herself to the truck. When they get their table Jim orders a slam for himself and eggs for Penny.
—Just eggs? The waitress asks.
—Just a plate of eggs, Jim says.
Craig orders the waffles and a Coke. Craig colours his placemat, black circles over and over. The jams and peanut butters are stacked in little packets. The creams are arranged in a white bowl, their green labels forming a dome.

Penny curls up in the booth, her hair falling in front of her face. Sick after a long night out. Craig didn’t always used to know what made her so sick, but he knows now.

The skin around Jim’s eyes is violet, tired. He opens three creams and pours them into his coffee then adds four sugars. The coffee drips over the rim while he stirs. Craig presses the crayon hard into the paper making it buckle and tear.

The waitress brings Craig’s Coke and a straw wrapped in paper. Craig sucks through the straw until the fizz makes it too painful to drink anymore. Penny nuzzles the wall. Jim leans back from the table, his arms stretched out along the booth, one arm behind Penny’s head, the other sticking out into the aisle, his hand limp.
—So. You have a girlfriend yet? Jim asks.
The waitress sets down the plates. Jim chews on a piece of bacon. Penny pushes her plate away, then rests her head on her arms, making her leather jacket squeak. Craig pours the syrup on his waffles. His mother stuffs her face further into her bent elbow, the way kids do when they play 7 Up at school.
—Long night, Jim says chewing.
The pools of syrup become shallow then disappear as the syrup soaks through the outer shell of the waffles. Penny’s plate of eggs sits untouched, off-white like a lump of used tissues.
—Mom, wake up.
The words rise above the general clinking of the Denny’s, the conversation and coffee percolating. Penny makes no move, not even a moan of acknowledgment.
—Leave her be, Jim says.
—Mom, wake up. Stop sleeping.
Some patrons turn at his imperative tone. Craig grips his knife. Jim picks up his empty coffee cup then sets it back down.
—Don’t talk to her.
—What do you want?
Penny’s words are muffled by her sleeve. She raises her head and looks at Craig through her dark hair.
—What?
Craig pushes her plate of eggs towards her.
—Eat your breakfast.
She leans back in the booth, sighing.
—I can’t even think about eating.
Craig scoops some of the eggs with his fork and brings them to her mouth. As the eggs touch her lips, she hits the fork from his hand.
—What the fuck, Craig?
—You should eat, he says.
—Does it look like I want to eat? Jesus.
With the edge of her hand she wipes the egg from her mouth then motions Jim to move so she can get out of the booth. A few minutes later, in the Denny’s parking lot, Craig sits beside Jim in the truck as his mother pukes into a juniper bush. The moon is still out, white and blue in the sky.
—See what you did, Jim says, his hands resting on the sun-cracked wheel.

The terrarium’s white heat-lamp is the only source of light in the room. The room, which is just a bed and dresser now that Grand Anne is gone, feels submerged, like a sunken submarine. Craig stands in front of Grand Anne’s dresser. He reaches into the terrarium and plucks out one squirming turtle.
—Abram.
Craig places Abram on the worn shag carpet then reaches back in for the other turtle.
—Sara.
She moves her legs as if walking on air as Craig lowers her down, beside Abram. Craig feeds them chunks of apple. He stretches out on the carpet and places the turtles on his chest. He likes the feeling of their little feet walking on his body. It makes him feel like a giant, like the ground. Craig doesn’t notice Sara has fallen off until she’s under the bed, making a steady getaway. To reach her, Craig pushes his face into the mattress and extends his arm as far as it can go. The bed smells like metal, dust and faintly of his Grand Anne’s hairspray.
Craig sets Sara beside her partner. Craig sits cross-legged in front of them studying the brittle edges of their shells. He sets one on top of the other, like stones on a beach.

In art class Craig cuts out a wood-sided Buick from the inside front cover of a tattered National Geographic. Matt pastes it onto the left side of a large piece of cardboard paper. A sand-coloured tank is glued askew on the other side. It looks about half the size of the Buick. Marker missiles—black with round tips—rocket towards the Buick. Pshhhhh. Craig draws a gun on the hood of the Buick and black dot bullets streaming out it. Tdddddd. Matt writes “Car vs. Tank by Craig and Matt” in the centre of the page, then outlines the letters in red.
Stacey come over to their table and looks at the picture.
—Can’t you draw? She asks.
She holds her picture in front of her, on her way to Miss Cook’s desk. It is a landscape with hills and a sun and rainbows.
—Miss Cook said we could do this, Matt says.
—It looks like a baby did it, Stacey says.
Craig wants to agree with her and laugh at the picture. He wants to pretend that it was only Matt who made the picture. Stacey is the smart girl in class. The other girls pick on her all the time because she’s also heavy.
Instead of agreeing with Stacey, Craig calls her a fat bitch. He has no choice with Matt standing right there.
There were the long alone days before Grand Anne came to live with him in the trailer. Days when he would squeeze himself into the smallest space he could find: a box for a coffee maker, the top shelf of his closet, the laundry hamper under his mother’s nameless garments. He was removing himself from this hamper when he saw the man for the first time. The rusted water stain in the ceiling tile formed him, a man wearing a tall hat, carrying his jacket over his shoulder like a hobo would. The man had one wide eye, which looked right at Craig. Craig brought his blanket and pillow into the bathroom so he could lie on his back and look up at the man. Penny must have found Craig sleeping there and carried him to his own bed, because that’s where he woke up the next morning. He stuck his head in the bathroom and found Penny washing her hands at the sink right below the man’s gaze. Craig knew even then that it would be impossible to tell her about the man.
And when Penny went away and Grand Anne came to live with him, he stopped looking for the man. The silent companion simply wasn’t needed.
Sometimes he pictures his Grand Anne in that smooth box. She’s in the shower, but doesn’t want to come out and can’t even if she did. He stared at the casket for so long that Penny had to take him by the shoulder and lead him back to the butt-worn wood pews.

Penny curls up in the booth, her hair falling in front of her face. Craig didn’t always used to know what made her so sick, but he knows now.

He sat beside Penny as if it were always done. The pastor talked about Anne; a son and his mother listened. Craig was seeing them like everybody around in the other pews saw them. He knew he could reach out and hold her hand if he wanted to. Penny slept on the couch that night after everybody had left.

Jim lights two cigarettes in his mouth and hands one to Craig. They sit at the kitchen table, the ashtray and bowl of plastic fruit between them. Jim draws the smoke into his mouth. It rises, streaming into his nostrils. He blows it out his mouth in a sharp burst, releasing one thick ring at the end. Craig tries to take as big a puff as he can without coughing and lets it out without inhaling. Jim taps his cigarette on the ashtray. Craig taps his cigarette on the ashtray, but misses and the ash settles on the table. Craig wipes up the ash with his finger, rubbing it between his finger and thumb.

Holden Baker studied English at the University of Calgary. He is one of the editors at NöD, a literary journal. 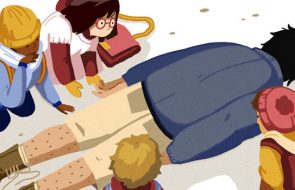 The Big Man in Cargo Shorts

Leonard was the first to find him. The man was face down in the school’s outdoor learning space, next to a planter of basil. He was fat, his calves the size of a turkey dinner, his hair a gnarled mess of seaweed. Leonard wondered if the man was dead and ...

After Pauls Funeral Amanda decided to shave off what was left of her pubic hair. Already some strands had greyed, some had gone brittle, bald patches had shown up. Enough. In his own way, David Attenborough encouraged her to go ahead with the shave. Attenborough always calmed her. His voice, gravelly ...

AV: What was the inspiration for your story? The inspiration for this story was a cottage and dock that I used every summer when I was  kid.  I wanted to explore the thoughts that kids have when they face something for the first time — whatever it may be. AV: Had you ...