Are weeds our next nature?

One June day I headed deep into the Whaleback wilderness of southwestern Alberta in search of one of the most beautiful of native lilies—the blue camas. Blue camas was part of the ecological mosaic, 15,000 years in the making, that the first Europeans encountered here. Almost 2,000 vascular plants and many dozens of mosses, ferns and other non-vasculars made up that native flora. Some, like aspen and rose, were common and widespread. Others, like camas, were rare and local.

Blue camas is easiest to find in wet meadows along Highway 6, north of Waterton Lakes National Park. Follow that highway north to Pincher Creek, though, and the flowers vanish.

I’d heard of some isolated patches farther north in the Whaleback. Looking for them offered an excuse for a hike in spectacular country. After two hours of hard walking, deep in the headwaters of Bob Creek, I was rewarded. Hundreds of indigo-blue flowers nodded quietly amid near-pristine meadows few people ever visit. I sat among them and ate my sandwich, grateful for the fact that, in spite of decades of landscape change, hidden havens of native flora can still be found in Alberta.

But then I pulled my pack back on and headed home. June days are long; I still had time to spray weeds.

Weeds are plants that don’t belong, ones that didn’t evolve with the place but were imported by people. Like party-crashers, weeds such as leafy spurge, knapweed and toadflax elbow the natives aside and take over. Or so we’re told; most rarely spread far from disturbed ground.

My nemesis is leafy spurge, a tall forb with milky sap and dusty-yellow flower bracts. It has a nasty habit of spreading into healthy native grassland and taking charge. Like many weeds, it arrived in North America as a stowaway in agricultural products. The dense stands along the Oldman River originated in hay imported to the Waldron Ranch from Manitoba during a drought early in the 20th century. Cows won’t graze leafy spurge and it can overwhelm native pastures.

I’ve spent decades spot-spraying leafy spurge. Using toxic chemicals was repellent to me, but it seemed a lesser evil than letting an invasive weed take over.

I’ve spent two decades spot-spraying spurge with herbicides to keep it from taking over our 50 acres of native prairie. The idea of using toxic chemicals was repellent to my wife and me, but it seemed a lesser evil than letting an invasive weed take over. It hasn’t worked very well—between spurge’s ability to resprout from its roots and the recurring floods that bring more seeds, the infestation has grown from a couple acres to more than 20. When spurge hawk-moth caterpillars appeared one summer we thought we were saved, but it soon became clear they were too few to eat the weeds down. I arranged with the local agricultural field man for the release of other spurge-eating insects too. They’re trying their best. We even invited a herd of goats in to see if they could eat the stuff out of existence. Nope.

The effort to eliminate weeds has no end. Ask any suburban lawn-lover about dandelions. It’s why I cut short an idyllic afternoon among the blue camas meadows—too many weeds, too little time.

Except, strictly speaking, blue camas is a weed too. It didn’t spread here on its own. People brought it.

Blue camas has what biogeographers call a disjunct distribution. Its centre of abundance is in the Columbia River basin, far west of Alberta. Isolated patches elsewhere are mostly along Aboriginal trade routes. First Nations people moved it to new homes and cultivated it there because they eat its bulbs. Many rare Alberta plants have similar origins—as food or medicine plants brought here by peoples who, themselves, originally moved here from elsewhere.

In his book The New Wild, environmental journalist Fred Pearce argues that calling a plant a weed is simply an expression of bias. All ecological communities are comprised of plants that used wind, water or animals to spread from elsewhere. Like us—all of us. Pearce goes so far as to suggest that at a time of intense change, weeds may even be nature’s salvation by stopping erosion, adding to local biological diversity and creating new niches for native species.

Dandelions, for example. Like spurge, the dandelion came to North America as an agricultural hitchhiker. Dandelions colonize disturbed ground rapidly, slowing soil erosion until native plants can take over. Bears, deer and elk eat dandelion flowers. Chipmunks, goldfinches and siskins eat the seeds. Dandelions have come to fit in—just like blue camas once did.

After years of fighting leafy spurge, I doubt I can ever come to love that plant. But I guess I’m going to have to try to like them. They aren’t going away, after all. Strangers or not, they are, irrevocably, going to be part of Alberta’s next nature. And who doesn’t like nature? 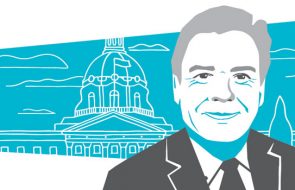