Whose Woods Are These?

If we lose our connection to wilderness, we risk losing the forests themselves. Illustrations by Olivier Martini.

Each year as summer approached, we prepared our escape. We hauled bins of dried food, boxes of tattered paperbacks, sleeping bags and an immense, hideous, grey-green army surplus tent out to our battered, gunmetal blue Ford. The tent ended up strapped to the roof with a series of complicated knots. Inside, my three brothers and I crouched upon a thick stack of mattresses and sleeping bags stretched across the back seat. Thus burdened, the car groaned and slowly pulled out of the driveway. Apart from the few days when we returned home briefly to reprovision, we remained out on the lam in the province’s forests and foothills for the remainder of the summer. Late in August we returned home, burnt by sun and wind, hair bleached, clothes faded and shoes worn thin.

Thoreau said he went to the woods because he wished to live deliberately and see if he couldn’t learn what nature had to teach. Well, none of us were Thoreau, but I’ve always maintained that those trips were the best education we ever received. We learned practical things along the way, like how to start a fire, how not to dismember your brother when splitting wood and precisely which wild mushrooms, if hypothetically eaten, would kill you instantly. But it went beyond that. We enrolled in a kind of primitive ichthyology as we swam after fish to determine what they did with their afternoons. At night we lay atop hills dotted with sage, stared at a sky thick with stars and discovered astronomy.  When we waded through a bog and spied herons slipping like ghosts through the bulrushes, nobody needed to explain the interrelatedness of plants and animals. In a single day, maybe even in a single hour, it was possible to immerse oneself in ecology, history, geology, geography.

We paid nothing, gained everything, and each of those informal seminars, absent tests or teachers, has stayed with me in a way that many of the formalized classes of my “genuine” schooling haven’t. Our family was poor. Scholarly “enrichment” or tutoring really weren’t options. Often as not we were nearly broke when we set out at the beginning of the summer and when we returned home at summer’s end we were flat busted. Given my frustration with conventional education, I’ve got to say that access to that alternative free schooling saved me.

To a certain degree, that school has since closed. Or at least it’s been privatized and is under new management. I’ve looked recently, and nearly everything connected to either public or wilderness also has a fee affixed.  Here’s the notice you’ll find posted on the Parks Canada website: “Entry and service fees are charged at most national parks and national historic sites, where revenues are kept to support visitor services and facilities.” The provincial parks have their own, similar rates for camping. Now there are many ways of defining the word public, but at least two—“accessible to or shared by all members of the community” and “devoted to the general or national welfare”—seem to be contradicted by this policy.

There was always a nominal fee attached to certain parts of the wilderness experience, but a more rigorous pay-per-use strategy was implemented by both the federal and provincial governments in the ’80s. This strategy, as articulated through the media at the time, had two separate goals: it meant to reduce publicly paid taxes by eliminating a line item from government expenditures, and it meant to develop a sense of stewardship and responsibility among those who most used the land. This policy had teeth—and now it has come back to bite in unexpected ways.

I read recently of a significant decline in the number of young people visiting the parks. Early in 2007, The Economist noted that “to the alarm of environmentalists and park managers alike, interest in the great outdoors seems to be tailing off among the young…” On the website Treeblogger, this comment: “One would think that with growing environmental awareness and the rise of the green movement, TreeHuggers everywhere would be flocking to national parks. In fact, over the last ten years… camping and backcountry trips are down 24 per cent overall.” A recent book entitled Last Child in the Woods: Saving Our Children from Nature-Deficit Disorder examines the consequences of diminished exposure to outdoor experiences for our contemporary generation and suggests that children who receive positive exposure to nature flourish in ways that their peers who receive less exposure don’t.

I find all this information disheartening and, considering the severe challenges the global environment is encountering today, a little bit scary. I’m sure the user fees aren’t the only reason for this phenomenon, but I’d bet they bear some of the responsibility. Fees may mean nothing to those who can afford them, but they have very real impact upon those who can’t.

The problem of access is made more complex when you consider the effect of the country’s changing demographics. When my brothers and I grew up in small-town Bowness some years back, Alberta was largely rural and it was easier to catch a glimpse of something that wasn’t made of plastic, concrete, asphalt or chrome. A short scramble up the riverbed took you beyond the town limits into something that looked vaguely like countryside. We camped just beyond Bowness Park and roasted wieners along the bend in the river near where Shouldice Park is today. But that train has come and gone. Bowness has since been swallowed and digested by Calgary, in the same way that outlying rural hamlets and villages were consumed by Metro Toronto and the Fraser delta’s smaller parishes and settlements were devoured whole by Greater Vancouver. The citizens of Canada increasingly live in “supercities” comprising a million-plus urbanized inhabitants. As recent headlines regarding the price of real estate have indicated, it’s expensive to live in our cities, and it’s expensive to leave them as well. The price of gas shows no sign of going down soon, so just navigating the traffic jams of the inner city and then getting out of town can generate a hefty bill. Families that live on limited budgets may perform the math as they add gas costs to entry fees to camping fees and discover the final tally to be too costly.

We paid nothing, gained everything, and each of those informal seminars, absent tests or teachers, has stayed with me in a way that many of the formalized classes of my “genuine” schooling haven’t.

At one time, having no money meant you didn’t have much but you were at least the proud partial owner of a splendidly wild countryside. I’m not sure that can be said anymore. After all, you don’t pay fees to somebody for what you already own. One thing is certain—the things we can’t access when we’re younger, we won’t treasure as we get older. When we have raised a generation of young people who have had no relationship with the wilderness, will they have any interest in protecting the environment?

And, as we place user fees on our forests, are we in fact protecting them or are we simply erecting ever-higher barriers between them and this next generation? Are we generating a psychological distance and, to a degree, privileging the wilderness?

I understand that funds are required to maintain our parks. But that strikes me as a public duty whose responsibilities ought to be shared equally by everyone through a broadly based tax that is pro-rated according to income. And here’s the trickier thing to communicate: stewardship of our wild areas is not only a public duty, it’s also a public privilege. The lessons the land has to dispense are cumulative and incremental and require continued exposure to have any long-lasting influence. I am also conscious of the pressures the public can place upon the wilderness. I appreciate the dangers of being “loved to death” by a population too eager to experience the pleasures of the mountains, but there are also dangers associated with being loved too little, of our natural areas dropping off the public radar and being, in a sense, ignored to death.

The wild tracts of this land have traditionally represented many things to North Americans, simultaneously symbolizing recreation, commercial resource and spiritual solace. Our understanding of who we are has at least partially arisen from this particular close relationship we share with the wilderness. It’s not possible to read Robert Frost’s “Stopping by Woods on a Snowy Evening” without perceiving how proximity to nature has altered in significant ways how he views the world.

“…The only other sound’s the sweep

Of easy wind and downy flake.

The woods are lovely, dark and deep.

But I have promises to keep…”

We have promises that we must keep as well. I consider a group of lanky high school students waiting for the LRT on a concrete island in downtown Calgary. They’re sharing a game on their cell phones as the wind tugs at their coats and spits wisps of dust and debris past them. They don’t look up or about, but remain hyperfocused, fingers nimbly skimming the keys. I wonder for a moment if perhaps the virtual pleasures of a digitized world can offer a kind of parallel opportunity to engage, study and reflect that for them renders the wilderness experience redundant. Then another quote leaps to mind, Thoreau again: “A stereotyped but unconscious despair is concealed even under what are called the games and amusements of mankind.”

Brothers Clem and Olivier Martini have been writing, drawing and poking about Alberta for many decades. They are currently collaborating on an exploration of schizophrenia that will be part graphic novel, part polemic and part urban travel guide. 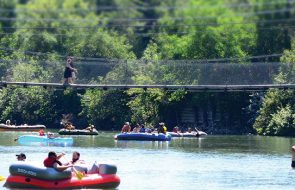 Requiem for a River

In 1875 the Northwest Mounted Police, dispatched south from Fort Edmonton to roust American whisky traders, arrived at Nose Hill and looked down on a green valley at the edge of the foothills. Below them they could see where the trail converged with a ford where the floodplain of the smaller ...